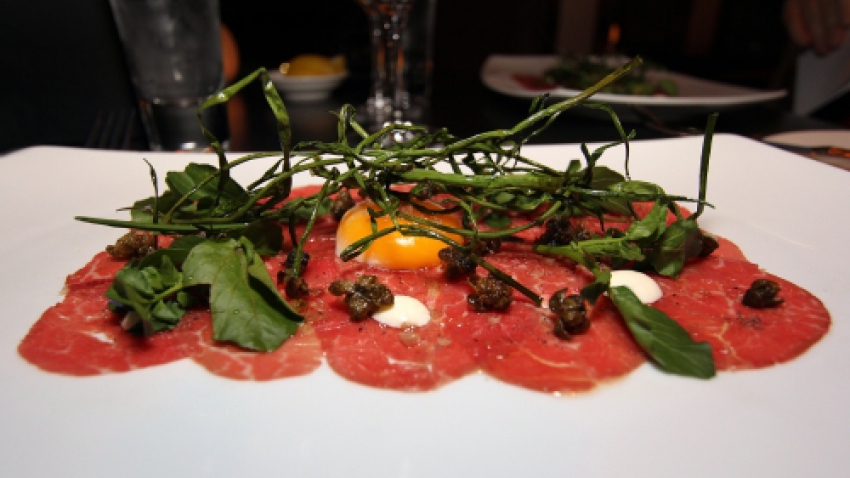 Chef Thomas Heinrich has jumped from one big city to the next, honing his skills in the kitchens of prestigious restaurants along the way. Beginning his culinary career in Sydney, Australia, he left to build a name for himself in New York City before returning to Sydney to work in one of its most respectable, fine dining restaurants. After being honored as one of Australia’s “most creative chefs”, he moved to Chicago to cook, before being recruited as Executive Chef at the Hyatt Regency Vancouver.

Having been in the Hyatt multiple times for food events and the gingerbread house display at Christmas, I surprisingly have never dined in the Hyatt’s restaurant, Mosaic. When I was presented with the opportunity to review Van Eat’s Art of Taste package, I jumped at the chance and went for dinner with my friend Ariane. Since there were two of us, we were able to sample everything in the package, so while I’ve written about all of them the package gets you a choice of one appetizer, one entrée and one dessert. 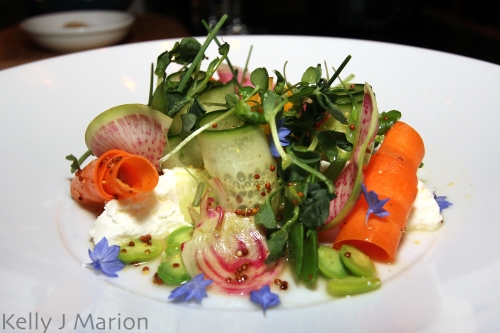 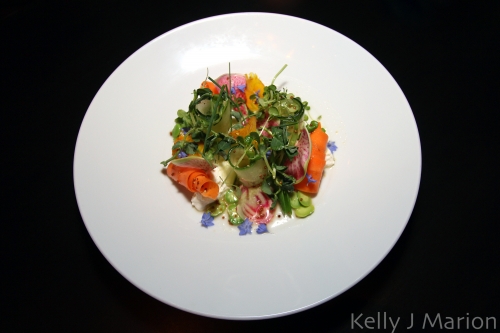 Having a spring salad while there was a monsoon outside felt wrong, but lifted my spirits knowing that the sunny season was on its way.

This salad is one of those dishes that you feel is almost too beautiful to eat; it even warranted itself two pictures in my article. It is refreshing, light and tastes extremely healthy with the subtle citrus, grainy mustard dressing. The house made sheep milk ricotta was the show stealer when it came to flavour and tasted lovely with the fava beans and watercress. The carrots were mostly for color, as explained to us by Chef Heinrich. 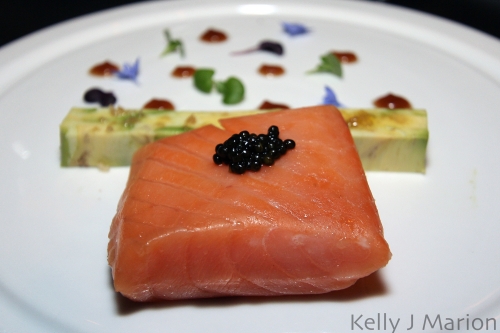 Imagine yourself sipping on some fruity Desert Hills Gamay 2011 while a glass dome is brought out to your table. This is the kind of thing you see in a movie, but also what I experienced at Mosaic.

Artfully prepared this salmon dish is unusual both in how it is laid out as well as the different elements on the plate together - an example of the creative genius that Chef Heinrich is known for. However it wasn’t the way it looked or tasted that left a lingering memory, but the smoky aroma released when the lid was lifted. The smoky flavour was more prevalent in the avocado terrine than in the salmon, so when paired together with a swipe of the sherry bourbon oak vinegar you were left with a sweet, smoky, melt-like-butter mouthful.

As Chef Heinrich stood by our side, eager to answer any questions about this dish and listen to our comments, I was surprised to hear that he felt that the dish needed more textural contrast. I can’t say that I disagree with him as everything was creamy and smooth, but it’s rare that you hear a chef admit that his dish needs adjustment.

What was my favorite of the two? A difficult choice, but I have to say the salad. 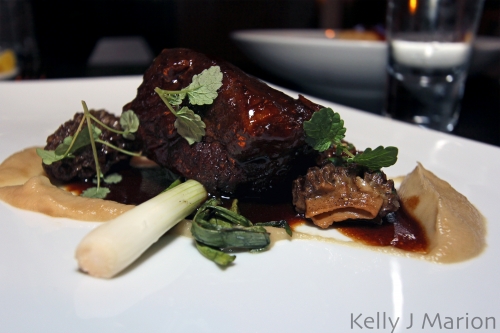 Lucky for me, Ariane is less of a red meat eater than I am so I had most of this dish to myself. The meat was tender, extremely rich with the garlic and salt in the meat enhanced by the morels. The morels themselves were a treat, fantastically prepared with a firm but juicy structure.

As if the meat isn’t good enough as it is, it is accompanied by a puree of foraged sweet onions from Vidalias in the Southern US, otherwise known as the sweetest onion around. “The sweetness is derived from the onions being grown in soil containing very little sulfur,” explained Chef Thomas. The VanEats package was made in the late winter so root vegetables were included, but now that it’s spring Chef Heinrich couldn’t resist but change it for the season. The pickled spring onions from Mikuni Wild Harvest will be replaced with ramps once the kitchen has them on hand. (Ramps typically signal the beginning of Spring vegetable season – usually in April.) 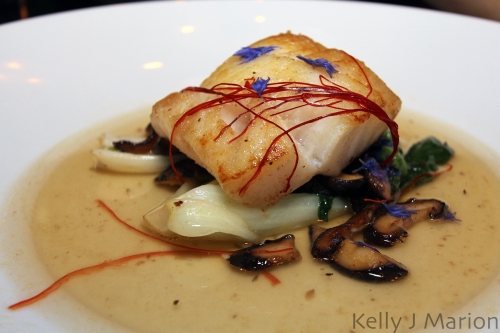 As beautiful on my plate as it looked in the pictures I had seen, I was taken aback by yet another perfectly presented dish. A small pot of hot dashi broth is brought to the table alongside the dish, where it is poured over the lingcod, wilting the flowers but putting you in sensory overdrive with the floral aroma. The hot broth is also poured over the dish when served so as to not overcook the fish.

I asked Chef Heinrich what his secret was to the perfectly cooked lingcod and he told me that they pan sear it for 90% on one side and “kiss the pan” on the other side before braising it and popping it briefly in to the oven.

As a shitake mushroom lover I was thrilled to see them swimming in the broth and absorbing the salty flavour. The strains of red chili are more for show than anything else so don’t shy away if you can’t handle heat; they are there simply for color and texture.

All of Mosaic’s seafood is sustainable and certified OceanWise but this lingcod is particularly special according to Chef Heinrich. “The line-caught fish is only touched by two sets of hands - the fisherman’s and the cook’s.”

What was my favorite of the two? 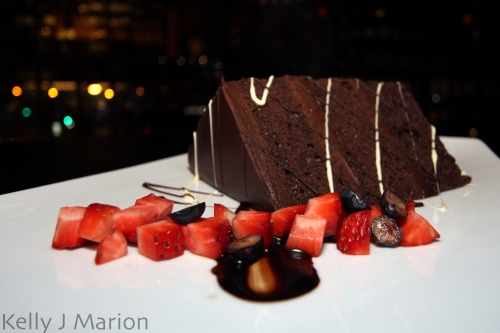 This cake is deadly and decadent and best fit for the extreme chocolate lover. I couldn’t stop eating it, especially when I discovered the thick layer of fudge on the top – I gave Ariane a hard time, claiming she was trying to keep it to herself! It was even better when I took a bit of the ice cream from the banana split and ate it with the cake. Everyone knows chocolate and dairy are the perfect match! The fruit was nice for a decoration but I could’ve done without the blueberries and I am not the biggest fan of fresh fruit and chocolate cake anyway so I ate it as a “palate cleanser”. 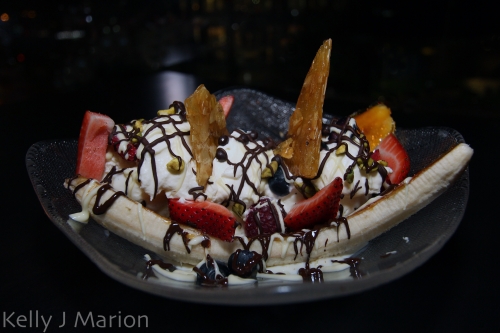 Vanilla bean ice cream and whip cream? My lactose sensitive stomach was in knots just looking at it. Did it stop me from eating it though? Not a chance.

The caramelized bananas were a nice touch and a creative addition to the banana split. While a classic banana split has a scoop of strawberry, chocolate and vanilla ice cream I liked that at Mosaic they spin that and add real strawberries and raspberries plus a drizzle of real chocolate.   I loved the crushed pistachios (rather than the typical peanuts) and the peanut brittle (rather than maraschino cherries?) because they added a delicious, much needed crunch. The peanut brittle and chocolate added a sweet touch to the otherwise primarily creamy dish.

What was my favorite of the two? I’m a chocolate lover, so definitely theMosaic Chocolate Cake.

In addition to ‘Art of Taste’ package above, Ariane and I enjoyed some additional dishes from the menu. Note, that these are not included in the Van Eats package, but are available to purchase on the side. 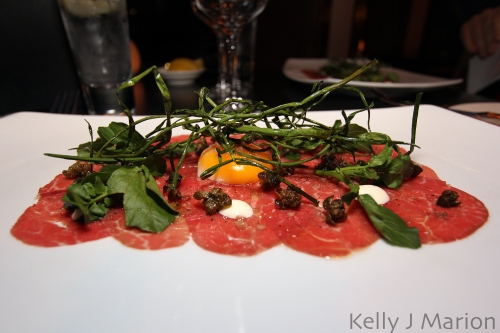 I’ve had great carpaccios and some I’d rather not talk about; Chef Heinrich’s carpaccio is without a doubt the former. The thinly sliced beef from Alberta is sourced from cows without added antibiotics or hormones. It tastes delightful on it’s own but even better with a bit of the creamy egg yolk and some fried chives and capers. The saltiness form the capers and the beef were toned down by the soft egg yolk, cooked passed runny but not yet solidified. This dish gets and A+ for texture and flavour and makes for a perfect appetizer for one or two. 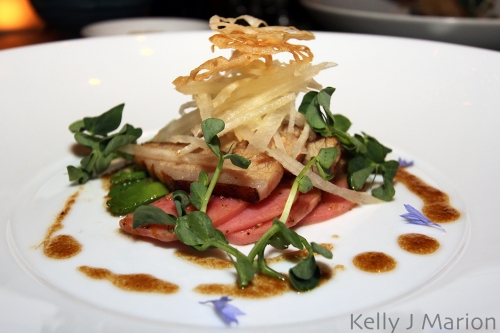 The locally sourced pork jowl is marinated in galbi (or kalbi), a Korean sauce with a base of soy sauce, sugar and garlic and variations as the chef sees fit. Since it is the fatty cheek of the pig the meat already as a fair amount of flavour to it and has different texture in each piece varying on the meat to fat ratio. I loved the addition of the crispy lotus root for texture and aesthetics, the pickled radish for the tartness to contrast with the savory sweet meat and the watercress for adding a fresh flavour and a subtle bitter tang.

For more high resolution photos check out my MOSAIC set on Flickr.

Because of Chef Thomas’ ingrained desire to support local growers and producers, you can expect fresh, seasonal ingredients on the menu at Mosaic Grille. Combine that with his innate attention to detail - obvious in the meticulous preparation of all the dishes - and you have sustainable, aesthetically pleasing, delicious food. You’ll also notice that main dishes fall under “perfectly portioned” meaning that most, if not all of them, are less than 500 calories and are “balanced” with protein, healthy fats and carbohydrates. This correlates to the new “catered to women” floors that they have in the Hyatt, equipped with make-up mirrors, smaller robes, smaller slippers and other special feminine products.

Art of Taste is a three item dining pass for $22, available between March 13th – July 13th and can be purchased here. Skip the surrounding Cactus Club and Joey's and mosey in to the Hyatt to have a beautiful view of the city with exceptional service and great food. 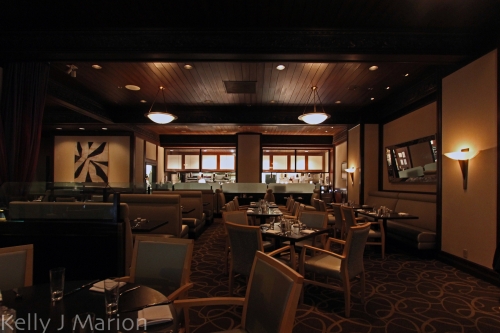 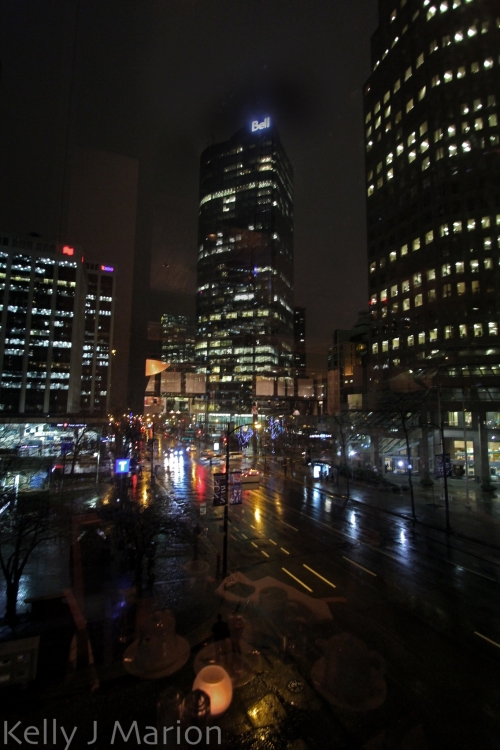 Disclosure: My meal was compliments of Van Eats and Mosaic Grille at the Hyatt Regency Vancouver for the purpose of previewing the Art of Taste package.