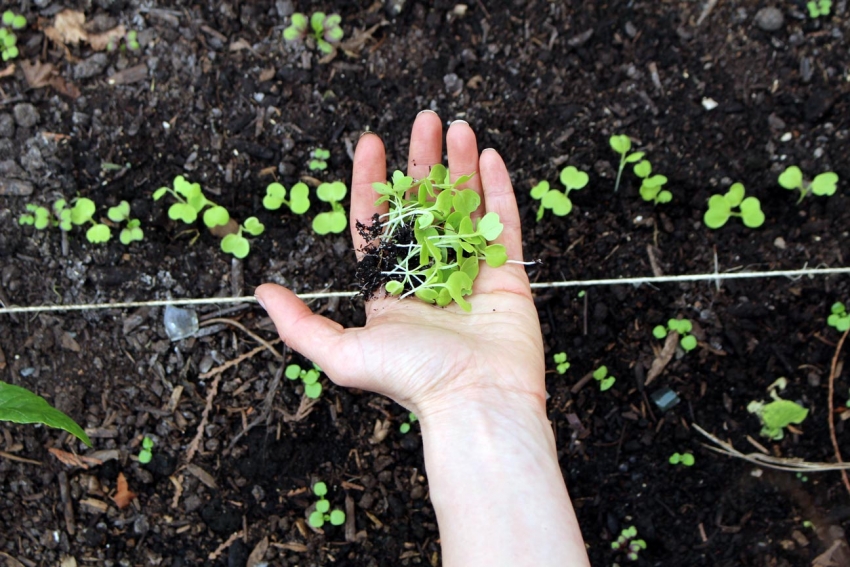 Soil is essential for life on earth. Photo by Jason Margolis.

My happy place is being covered in mud. Even in the middle of winter, I’ll spend hours out in the garden, digging parsnips and harvesting hardy greens without complaint. It’s only after I’m done that I realize I’m a mess. It takes a lot of work to scrub my fingernails in preparation for my next day in the office.

For most people, soil is “dirt”: a slightly unpleasant substance that we are taught to avoid getting on our skin. The truth is that soil, like rainforests and oceans, is actually one of the world’s great ecosystems. According to Wikipedia’s surprisingly fascinating entry on soil, “it contains most of the Earth's genetic diversity. A gram of soil can contain billions of organisms, belonging to thousands of species.”

Let that sink in for a second. A gram of soil can contain illions of organisms.

Soil is alive. It’s home to complex networks of bacteria, fungi, prokaryotes, insects, arthropods and worms, bound together by the minerals, air and water in which the roots of plants dwell. It’s this complex network that creates the nutrient recycling process known as compost and that enables plants to absorb nutrients and, in turn, to feed us.

December 4, 2015 was World Soil Day, marked by the UN’s Food and Agriculture Office (FAO). It’s the December holiday you didn’t know you needed to celebrate. As our world leaders meet in Paris to discuss climate change, it is worthwhile to know that, according to the FAO’s page on World Soil Day, “the largest store of terrestrial carbon is in the soil”. In other words, preserving soil plays an important role in regulating our climate. A 2014 article in Yale Environment 360 by Judith D. Schwartz, Soil as Carbon Storehouse: New Weapon in Climate Fight? states that “Many scientists say that regenerative agricultural practices can turn back the carbon clock, reducing atmospheric CO2 while also boosting soil productivity and increasing resilience to floods and drought. “

Unfortunately, soil is under threat. Around the world, industrialization, resource extraction and poor agricultural practices lead to soil erosion, acidification, salinization and contamination. Destroying an existing forest doesn’t just kill the trees that we can see – it also degrades the soil underneath. Human life is utterly dependent on soil. Amidst a changing climate and growing population, it’s essential that we take care of soil by adopting sustainable agricultural practices.

Soil isn’t sexy. There aren’t any panda bears or dolphins living within it. Instead, its flagship animals are centipedes and worms. It’s home to a kingdom of creatures we can’t see, or don’t want to see. Because of this, “soils have been neglected for too long”, according to the FAO’s World Soil Day page. It’s time to give soil the respect it deserves.

What can you do? Learn about soil, compost your food scraps, and do what you can to support local, sustainable farmers. If you need more convincing that soil is cool, consider this: it contains bacteria that may support human health, including one that boosts your mood. No wonder being muddy makes me so happy.

Rebecca Cuttler is an urban gardening teacher, member of the Vancouver Food Policy Council and board member of the Environmental Youth Alliance. Join her on Roundhouse Radio 98.3 FM every Tuesday afternoon at 5:00pm for Fabulous Urban Gardens on “Home” with host Jana Lynne White. She blogs about urban food gardening at http://abundantcity.net.