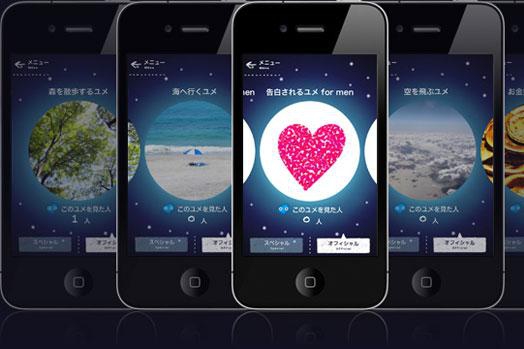 Japanese advertising company Hakuhodo invented a new app with an ability to control dreams: the Yumemiru (meaning "see the dream"). Or, at least it tries to.

Mega freaked out and super curious?

The app waits until you've entered a state of light REM sleep, then emits dream-altering sounds in the hopes of affecting your thoughts during shut-eye.

After selecting one of the eight dream scenarios, which include:

All you do is select the dream, choose how influenced you want to be, put the phone to "sleep" and pass out. Apparently, the phone will play a soundtrack that leads the brain to (maybe) see the selected dream.

The more influenced you want your dreams to be, the more times the soundtrack will play.

Yumemiru also has an alarm feature to force you to wake you up and an option to share your dreams with friends once you enter reality. Because, uh, they really want to know how rich you became or what kind of hot date you picked up in your dreams.

The app is free and it's available on iTunes for iOS devices.

As the app suggests, "Have A Good Dream."