HootSuite stays local as the battle for Vancouver's talent heats up. 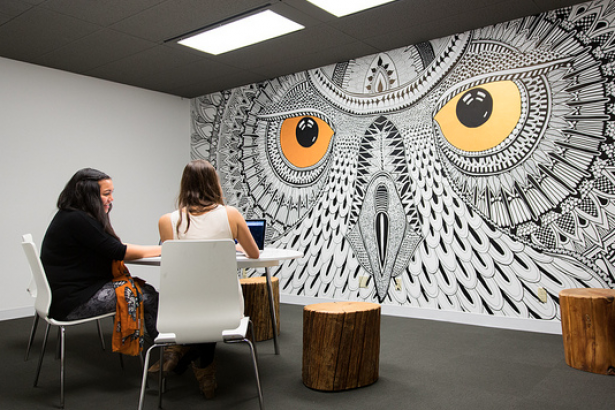 In the lobby of Hootsuite's new offices, I'm greeted by someone in a giant owl suit, and I fear I've missed my calling. Today is a big day for HootSuite as the social media management company opens its doors to the press. I got here too early, so I'm sipping coffee and waiting for the other media folks to show up. Trying not to let the giant owl know I'm staring at him. Her. It. I think the owl probably suspects, though. 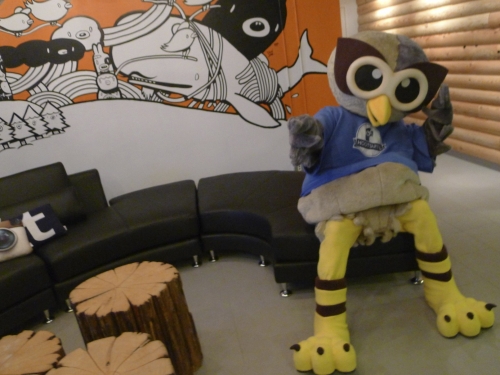 HootSuite's new nest is a 33,000-square-foot city-owned building; a former police building in Mount Pleasant. From its humble beginnings in Railtown, HootSuite moved not only to accomodate its growth from 50 to 300 employees, but to future-proof for its upcoming hiring binge of 100 more. Most of HootSuite's parliament of employees work here in Vancouver, with the rest in London and Asia-Pacific.

Communications Manager (and mural-painter) Sandy Pell takes us through to the dev-team area, where the foundation of HootSuite's social media management platform is built and maintained. Though past the startup phase, the company has kept the look and feel of a scrappy little company: open-plan workspaces, secondary computer displays balanced on cardboard boxes, hip-casual work attire, 47 giant television screens. There is owl imagery everywhere, and each meeting room is named after a type of owl. I'm the only person I can see wearing a tie.

As we walk towards the user support area, where staffers manage everything from real-life meetups to translation, Sandy points out a screen showing sentiment analysis for Wrestlemania 29. Sentiment analysis is part of the next level of social media monitoring: you don't just want to know how many people are talking about you, but you want to know why, and how they feel. She knows specifically that it's Wrestlemania 29.

We walk into the kitchen and lunchroom area, which hearkens back to that classic turn-of-the-21st-Century startup chic. Wide benches, big fridge, beer on tap, fruit basket, and, yes, foosball tables. 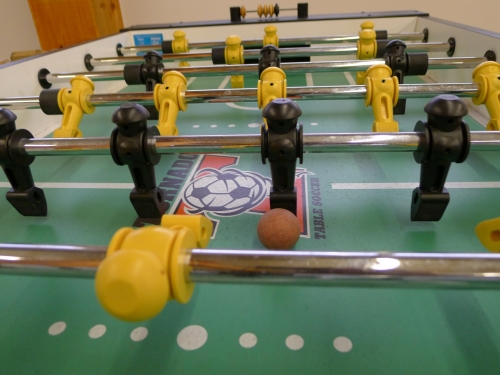 Sandy is telling us that HootSuite is getting 700 resumes per month (though they can surely expect a spike after today's media coverage). HR Director Ambrosia Humphries shows off some of the creative ways that would-be employees have reached out: massive infographics, cakes, and a pillow (from a guy who runs Vancouver's pillow-fight scene, which actually exists). 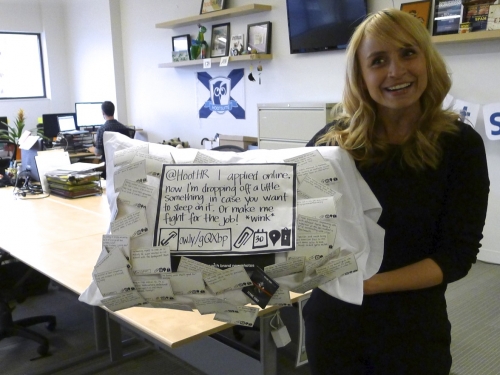 I remember when NowPublic, the startup for which I once worked, moved from its Gastown location to a much larger Downtown space; and that sense of hope mixed with nervousness as we wondered what and who would fill the empty desks, and how we'd meet that pressure to grow. (We never had a foosball table, but we had really good coffee.)

HootSuite is indeed growing, having accumulated over six million users; a million of them just since October 2012. HootSuite is a freemium offering, in that 95% its users don't pay a cent for the service. That other 5%, though, they keep the lights on and the beer taps in the kitchen area active. The freemium business model turns end users into evangelists, as they show the service to their managers and bosses, and so on up the line, until a corporate decisionmaker signs the company up for a paid account.

Though Sandy won't tell us exactly how many paying clients HootSuite services, she will divulge that 79 of the Fortune 100 companies number among them.

Sandy leads us to the gym (they have a gym) and the power nap room (they have a power nap room). The Edison lights, the wood paneling, and the row of cots suggest a sleepaway camp vibe. We're told that people take advantage of that nap room with some regularity. It's all about work-life balance.

Upstairs among the long rows of desks, we find a row of tents which can be used for impromptu meetings when you need that extra bit of privacy. They're reminiscent of Camp Ivanhoe in "Moonrise Kingdom".

There are whiteboards everywhere, as well as a few dogs lounging around. Enabling employees to write on the walls is also big among digital agencies. 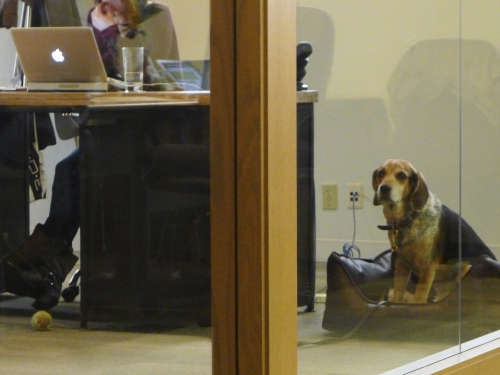 Sandy leads us up to the roof, which offers a 360-degree view of Vancouver. It's about to rain, but we can appreciate the vantage point. Who else was thinking about spring skiing when looking north?