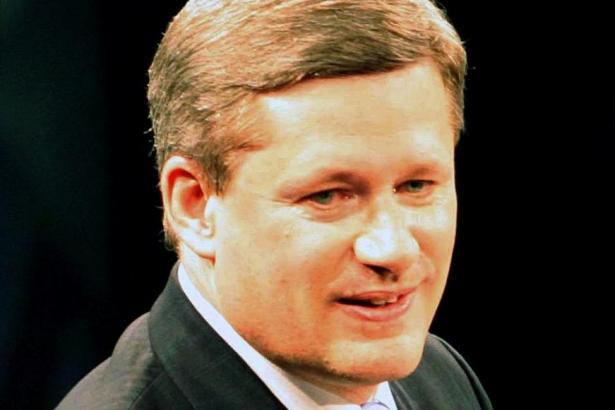 It's a balancing act for Prime Minister Stephen Harper as he begins a trade mission to South America this week. With markets -- and whole economies -- in crisis in the US and Europe, his goal is to expand customers for Canadian goods and services beyond those troubled areas.

BRASILIA, Brazil -- The dual debt crises in the United States and Europe that triggered turmoil in financial markets will undoubtedly be top of Prime Minister Stephen Harper's mind on Monday when he meets Brazil's president.

Harper arrived in the Brazilian capital on Sunday night on the first leg of his swing through South and Central America.

Finance ministers and central bankers from the Group of Seven major industrialized nations held a round of emergency talks over the weekend to discuss sovereign debt concerns in the eurozone and the historic downgrading of America's credit rating by Standard & Poor's.

The credit rating agency stripped the United States of its top-notch AAA credit rating for the first time Friday, bumping it down one rung to AA+. The lower credit rating could eventually make it more expensive to borrow money on everything from car loans and mortgages to government bonds.

As the G7 leaders spoke, their deputies from the broader Group of 20 advanced and developing economies talked about ways to calm the roiling markets.

Skittish and spooked investors dumped their stocks Thursday in the biggest one-day sell-off since the financial crisis of late 2008.

The cause of their worry was not restricted to the United States. Billions were wiped off the stock markets last week as fears grow that Italy and Spain will default on their huge debts. The consequences of such a scenario could be dire, given the size of those two economies.

Markets across the Middle East, which open Sunday through Thursday, tumbled on the first day of business since S&P downgraded the U.S. credit rating. Investors were anxiously awaiting the opening of Asian markets to see if they would follow suit.

It is against this troubling economic backdrop that Harper and Brazilian President Dilma Rousseff meet for trade talks at the Planalta palace in the capital city of Brasilia.

The Conservative government is eager to make inroads with Brazil, now the world's seventh-largest economy but expected to rise to No. 5 within a few short years.

Canada is looking for new export markets since its largest trading partner, the United States, is struggling to get its financial house in order.

Some 400 Canadian companies already operate in Brazil, which is Canada's 10th largest trading partner. Exports of Canadian merchandise totalled $2.6 billion in 2010 -- that's up 60 per cent from the year before -- and imports were $3.3 billion.

Under the Conservatives, the government of Canada has sought bilateral free trade deals with a number of countries, placing a special emphasis on the countries of Latin America and the Caribbean.

Three years ago, Canada inked a free trade agreement with Colombia, where Harper visits Wednesday. That deal comes into force next week.

The former Liberal government of Jean Chretien signed a free trade pact with Costa Rica that has been in place since 2002. Harper stops there Thursday.

Officials from Canada and Honduras -- where the prime minister travels Friday -- have met twice since December. Talks with the so-called Central American Four, consisting of Honduras, El Salvador, Guatemala and Nicaragua, have dragged on for a decade. Canada is closer to striking a deal with Honduras than with any of the other countries. However, the Prime Minister's Office says it does not expect to announce a free trade deal with Honduras on this trip.

Doing a free trade deal with Brazil is trickier. Brazil needs the consent of three other South American countries -- Argentina, Paraguay and Uruguay -- that are members of a common economic bloc called Mercosur to enter into such an agreement.

In a show of the importance Harper's Conservatives place on Canada-Brazil relations, cabinet ministers John Baird, Rona Ambrose, Diane Ablonczy and Ed Fast are accompanying the prime minister on the two-day visit to Brasilia and the financial centre Sao Paulo. They are joined by northern Saskatchewan Conservative MP Randy Hoback and a cadre of Canadian business leaders.