Enjoy that pack of nuts, economy class. Up front, it's lemon mahi-mahi

American airlines investing big bucks to hold on to high fliers. Preflight champagne, flat-screen TVs and seats that turn into beds are just a start. 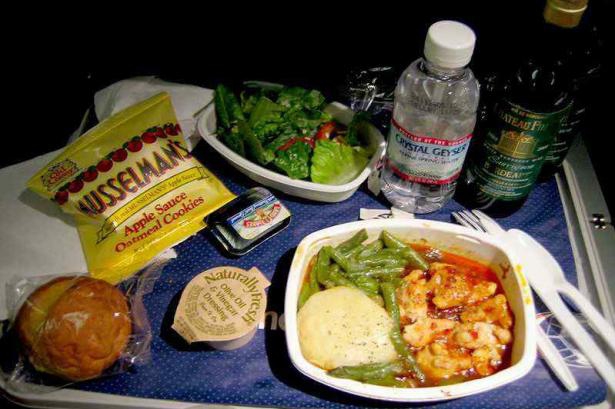 Here's something to think about next time you're stuck in the middle seat on a long flight. And the baby ahead of you cries non-stop. And the guy next to you falls asleep on your shoulder. And your meal looks the poster child for the Bad Airline Food hall of fame.

Know this: They're not living like that up in first class.

American airlines are finally bouncing back from the rough years that followed 9/11, and they're investing heavily in amenities to attract and keep their high-paying passengers.

Just for a start, that means preflight champagne, flat-screen TVs and seats that turn into beds. And flight attendants who greet high fliers by name, hang up their jackets and serve meals on china.

The Canadian Press has the details:

NEW YORK -- Flying has never been so good. At least for those able to splurge.

While most holiday travellers will fight for overhead bins and go hours without a snack or room to stretch their legs, life in first class is stress free. It's always been a special place on the other side of the curtain. Now, it's getting even cushier.

U.S. airlines, profitable again after a disastrous decade, are spending almost $2 billion to upgrade amenities for their highest-paying customers. On the most profitable international routes, high fliers are being treated with preflight champagne, flat-screen TVs and seats that turn into beds. Flight attendants greet them by name, hang up jackets and serve meals on china.

The lavish treatment is meant to keep people like Tim Carlson happy. Carlson, the chief financial officer of a semiconductor materials company, has taken 189 flights in the past two years, travelling 353,176 miles on United and its partners.

After the pilots, Carlson might just be the most important person on the plane. United will do anything to make sure another airline doesn't steal his business. Agents call him about delays and reroute him so he doesn't miss meetings.

"I go to the top of the list for the next flight,'' Carlson says.

On a recent trip from Newark, N.J., to Brussels, he was met at the curb with a boarding pass and escorted to the front of the security line. Four minutes after being dropped off, he was past the checkpoint.

Most of the 3.4 million Americans who were expected to fly on the American Thanksgiving holiday weekend won't get anything close to that treatment. They paid a little under $400 for their round-trip tickets. And it's a cutthroat business. To save $5, passengers are likely to choose another airline.

So, it's no surprise that the most loyal customers, and those willing to pay more for better services, are the ones airlines want to reward.

First-class and business-class passengers make up only 8 per cent of international travellers but account for 27 per cent of revenue, according to the International Air Transport Association. While a round-trip coach ticket between Chicago and Beijing might run $1,000, business class costs $4,000 and first class $12,000.

"There is a war going on for the profitable passenger,'' says Henry H. Harteveldt, co-founder of the travel firm Atmosphere Research Group.

Airlines are focusing on three areas:

- Giving passengers a full night's sleep. Delta, United and US Airways are installing seats in premium international cabins that recline into flat beds. American isn't making that investment, but is adding turndown service on some routes; at bedtime, passengers are given pyjamas and slippers while flight attendants lay down a quilted seat cover, duvet and pillow.

"They're now realizing that they need to offer a competitive product to attract the highest-dollar passengers,'' says Gary Leff, co-founder of frequent flier site MilePoint.

On foreign airlines, the good life is even better.

Emirates Airlines first-class passengers can shower on its Airbus A380s, and walled-off suites come with minibars. Lufthansa has a separate terminal in Frankfurt for its first-class passengers, but it's hardly an inconvenience: Passengers get dedicated immigration officers and are driven to their plane in a Mercedes-Benz S-Class or Porsche Cayenne.

Singapore Airlines trains flight attendants how to walk without waking passengers. And at Virgin Atlantic's London lounge, passengers can play pool, get a massage or relax in the sauna.

For a brief moment in the 1960s and '70s, flying was glamorous for all. Passengers dressed up for the occasion. Planes had piano bars, and flight attendants -- hired for their looks -- wore tight miniskirts. But tickets cost significantly more.

By the end of the 1970s, the royal treatment was gone. Planes started to resemble crowded buses. In the decade following 9/11, any perks that were left vanished. Airlines faced new security-related costs, higher fuel prices and two recessions. They weren't looking to impress. They just wanted to stay in business.

That's why most travellers have seen free meals, leg room and blankets stripped away. Even the front of the plane became stale. Foreign airlines took advantage and courted U.S. travellers with new, fancy first-class and business-class cabins.

Now, U.S. airlines are catching up. They finally have some spare cash, and as they buy new planes, they have a reason to upgrade the interior design. Engineers have also found ways to let seats go flat without requiring more space.

"If you want to attract business travellers, you need a lie-flat seat,'' says Joel Wartgow, a senior director at Carlson Wagonlit Travel, one of the largest corporate travel agencies.

To be sure, coach passengers are seeing some improvements these days, such as live TV and Wi-Fi service on select airlines. And they can enjoy other small luxuries for a fee. Seats with a few extra inches of leg room start at $9. Daily lounge passes cost $50. American even offers a celebrity treatment, with an agent escorting passengers from the curb to the gate for $125.

But for the vast majority of passengers, the gap is growing between the front of the plane and the back. That's because the airlines know what matters to the average traveller. And it's not caviar.

"They want their luggage. They want to arrive on time. They want the airplane to be clean,'' says Andrew Nocella, US Airways senior vice-president of marketing. "Most importantly, they want a low fare.''