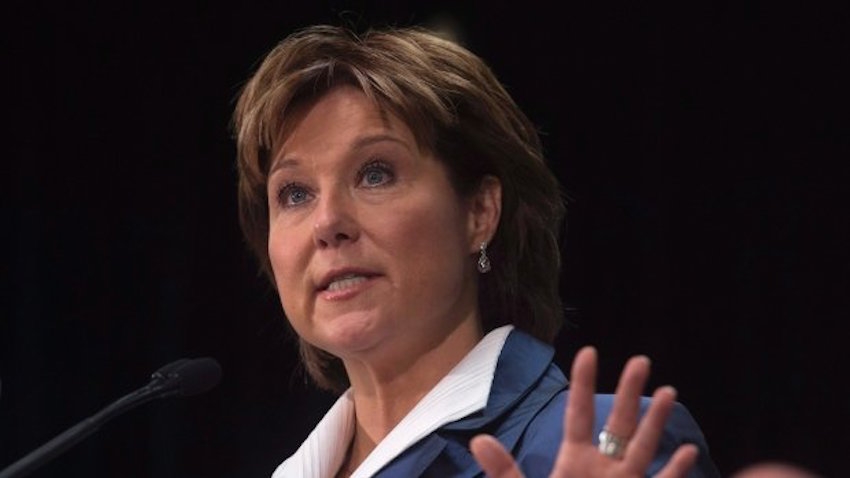 Premier Christy Clark says British Columbia will create an environmental fund with money that it expects to receive as part of a deal to support Kinder Morgan's pipeline expansion project.

Clark said Thursday one of B.C.'s conditions for her government's acceptance of the $6.8 billion Trans Mountain project involves negotiating a fair share agreement with the energy company that reflects the risks associated with an oil pipeline and increased marine tanker traffic.

"If, in an agreement with Kinder Morgan, there is a direct economic benefit or a piece of the profits for B.C. we will devote all of that to areas of environmental protection," Clark said at a news conference following a speech to the B.C. Road Builders Association.

"All of the money, I think, needs to go back into making sure that we mitigate the risk that British Columbians are taking with our land base and on the marine side by allowing heavy oil to be shipped through our province," she said.

Kinder Morgan President Ian Anderson was unavailable for comment on Thursday, but said Wednesday in a conference call that progress is being made on every condition, including condition five which calls for B.C. to receive a fair share of the fiscal and economic benefits from a pipeline project.

A B.C. government official, who spoke on condition of anonymity, said the province has a general sense of the amount of money it expects to receive as its share for the risk the province will bear from the pipeline and an increase in tanker traffic on the West Coast.

The official did not suggest the amount of money the province is eyeing, but said negotiations will determine if the province receives a one-time payment or payments by instalment.

The talks will begin in earnest if the project receives approval in an ongoing B.C. environmental assessment review, the official said. The results of the review are expected within weeks.

Dirk Lever, head of energy infrastructure research at AltaCorp Capital, said it would not be out of the ordinary to see such an agreement take the form of a pipeline toll to move oil across the province.

"I think this happens all the time, it's just called different things," he said. "It's called rent, it's called easement payments. Is it out of the question? No, it would not be."

Lever speculated the incoming United States government could end up seeking a similar toll or rent charge if the Keystone XL pipeline from Alberta to Texas is resurrected.

Prime Minister Justin Trudeau announced the Kinder Morgan pipeline approval Tuesday, saying the project is in the national interest. The pipeline expansion comes with 157 conditions before it's approved.

The project would triple the capacity of the Trans Mountain pipeline, from 300,000 to 890,000 barrels a day, and add 980 kilometres of new pipe along the route from near Edmonton to Burnaby, B.C.

It would also increase the number of tankers leaving Vancouver-area waters from five to 34 per month, prompting fierce opposition from local mayors, First Nations and environmental groups who say any risk of a diluted-bitumen spill is unacceptable.

With files from Ian Bickis.