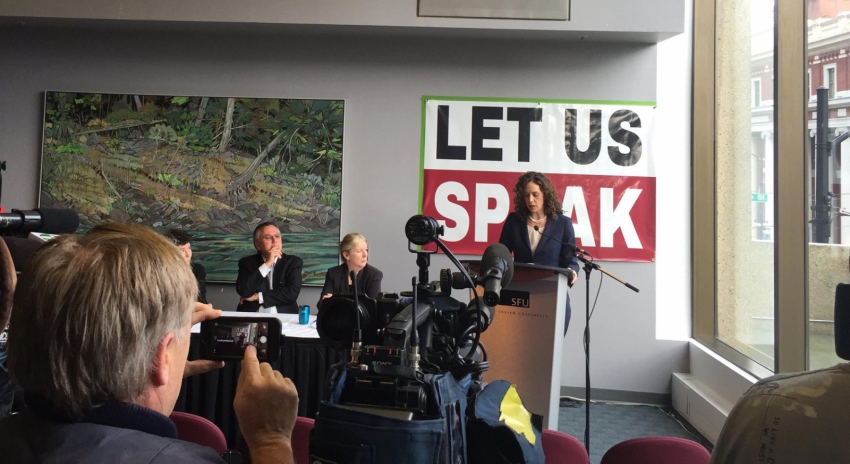 Despite living adjacent to a Kinder Morgan owned tank farm in Abbotsford, John Vissers was denied intervener status by the National Energy Board last year, to participate in hearings regarding the proposed TransMountain pipeline.

Today, Vissers was one of several applicants to file a challenge with Canada’s top court, over a review process he believes has denied his right to free expression.

He and several of the other applicants, which includes well-known environmental activist Tzeporah Berman, held a press conference this morning to address their concerns to the media.

“Our Federal Government is undermining the process to the point where participatory democracy is almost impossible,” Vissers said.

When he discovered that he had been denied, he was surprised. Ten years ago Vissers participated in a similar NEB review, one that involved a transmission line and power plant in the Fraser Valley. It was a process he described as more transparent than its current form.

“We were welcomed by the NEB to come participate,” he said. "They even held training sessions to help us become interveners.”

Today’s challenge to the Supreme Court of Canada hinges on a reading of the NEB Act that states that only participants who are “directly affected” by the pipeline, or have “relevant information or expertise,” can become interveners.

Tzeporah Berman, who is a co-founder of the advocacy group ForestEthics, believes this understanding of the NEB Act unduly restricts Canadians' Charter rights.

“The narrow definition of ‘directly affected’ that the NEB is using is an attempt to limit Canadians right to be heard,” Berman said, at the press conference earlier today.

The NEB was reached for comment on this story, but stated that it would be “inappropriate to comment at this time" because the matter is now before the courts.

At the press conference, many speakers also said were also concerned with the NEB’s decision not to include climate change as an issue during the hearings.

In a decision by the Board last year, upstream concerns such as climate change were deemed to be “incidental,” and not relevant to the process.

The decision further declared that the Applicants had “numerous options for expression at their disposal,” to raise concerns like climate change outside of the review.

Scott Stoness, VP of Regulatory & Finance with Kinder Morgan Canada, believes the NEB has facilitated an open and participatory consultation.

“The Board has outlined a fair and efficient review process that provides multiple opportunities for public involvement,” he said in an email interview.

But Vissers disagrees. He remembers the NEB hearings when the Sumas 2 transmission line was to be built in the Fraser Valley. Back then, issues like pollution were central to the public debate, he said, further adding that practically anyone could take part.

“We had grandmas, and high school kids, and teachers participate,” he said. "They simply had to ask, and they were welcomed."

The proposed $5.4-billion Trans Mountain expansion would twin the pipeline and triple the capacity for Alberta oil intended for Asian markets.

A lawyer for the group of applicants said that a response from the SCC could take up to nine months.