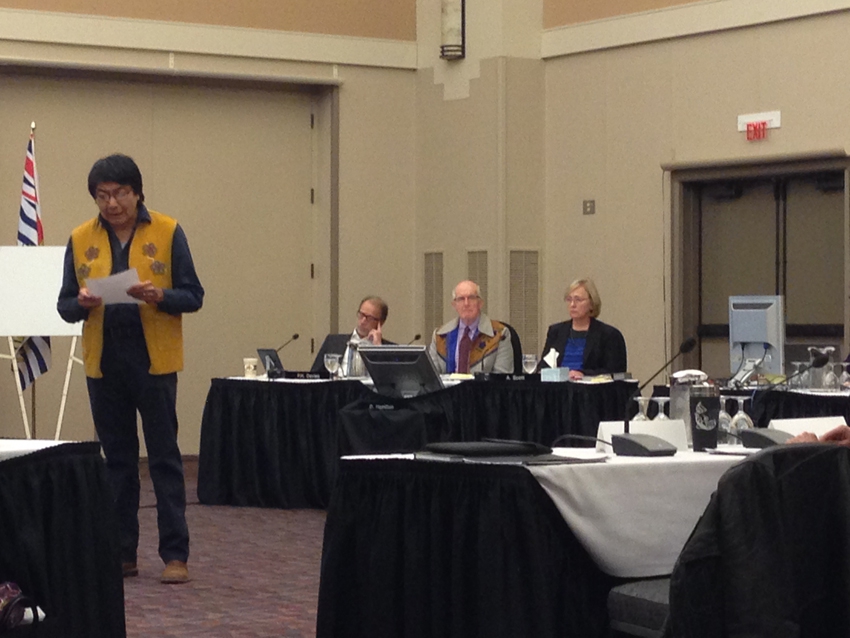 On Friday, the NEB concluded its 21 days of First Nation intervener hearings on the Kinder Morgan Trans Mountain Pipeline. Before the oral history of the Tsawout First Nation was heard, constitutional issues were addressed, both on the steps in front of the Fairmont Empress Conference Center and in the hearing room.

Squamish Chief Ian Campbell told the gathered crowd that leaders of twelve First Nations had sent a letter to Greg Rickford, Minister of Natural Resources, stating the Crown has failed to fulfil its constitutional duties by relying on the NEB proceedings, for the following reasons: 1) First Nations were not consulted about the overall framework for the review and as a result, the process fails to fully assess impacts on Aboriginal rights and title; 2) a quasi-judicial tribunal cannot accommodate First Nation concerns, in part because there is no live cross examination of witnesses; 3) due to “woefully insufficient” capacity funding, First Nations must spend hundreds of thousands of dollars from their limited budgets; 4) the Crown has not laid out how consultation will proceed following the NEB recommendation and, in any event, it will be too late.

Brenda Gaertner, counsel for the Tsawout First Nation (part of the Saanich First Nation), emphasized that the Tsawout hold sacred responsibilities to their territory. She noted that the timing of oral history testimony should have come after the exchange of written evidence and the Tsawout expect the opportunity to present supplementary evidence. She noted that the NEB hearings are not a discharge of the Crown’s duty to consult. Such consultation must occur on a government to government basis and not through a technical regulatory process. Finally, she explained that the Tsawout Nation must provide its consent for the project to proceed, under Section 35 of the constitution, the Douglas Treaty and international law. This, she said, is not being sought.

The following descriptions of portions of the Tsawout oral testimony cannot do justice to its richness and cultural complexity. But they do give a taste of it. 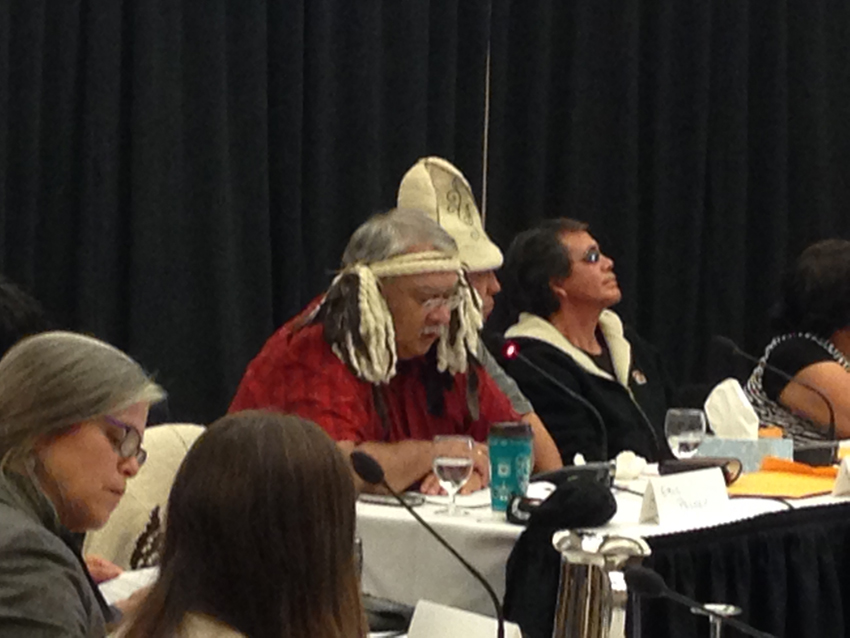 Eric Pelkey, administrator for the Douglas Treaty Nations Committee for over 20 years, commenced his oral history with a genealogy chart that establishes his descent from a chief in that 1800s who, through his skill as warrior and negotiator, brought the Saanich Nation together and a second chief who brought the Nation into the 1900s and established the Nation’s connection to spirituality and the magic of nature.

He noted that their traditional sites range from Boundary Bay, through the southern Gulf Islands and San Juan Islands, south to the Elwha River of the Olympic Peninsula and west to Saanichton. “The Saanich Bay clam and crab beds have sustained the Tsawout for thousands of years,” Eric Pelkey said, “which is why conservation means so much to our people.” He noted the fishermen of their tribe are still out there and they see the proposed tanker lanes, which will have a direct impact on their traditional sites.

He described the cultural importance of a small island off Saturna Island, Tumbo Island, where the tidal currents always circle in a clockwise direction and where a training school for spiritual practices was held. “This is a very sacred site,” he said. Human remains have been found there, and it is at the entrance to the tanker shipping lane. Other islands, including one known as Skull Island, hold ancestor remains as well, usually those of high chiefs.