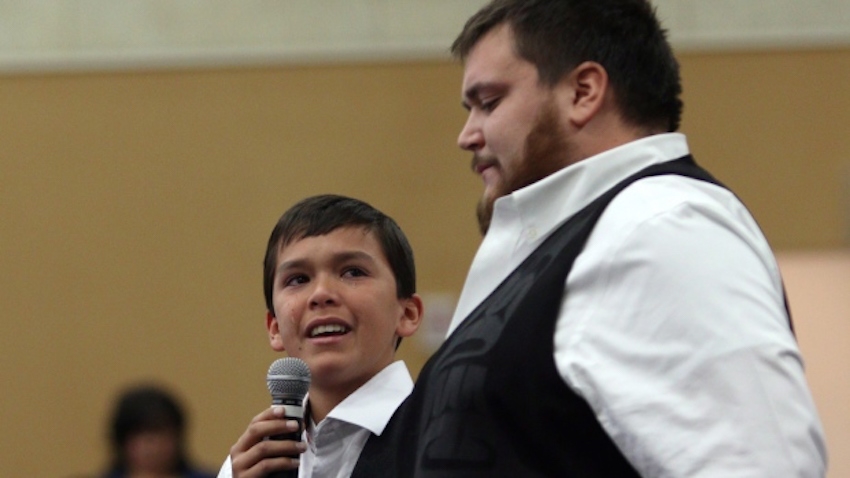 A Grade 8 student stunned a gathering of national aboriginal leaders and the federal indigenous affairs minister Monday by saying he volunteered to become his school's indigenous language teacher after one too many berry-picking field trips.

Tim Masso, 13, said he asked school officials if he could help teach the indigenous studies course at Ucluelet Secondary School on British Columbia's west coast even though he is still learning the Nuu-chah-nulth language.

Masso said he has designed flash cards so he and his class of 23 students in grades 8 to 10 can learn the indigenous language.

He was among people asking questions after Indigenous Affairs Minister Carol Bennett spoke at an Assembly of First Nations annual meeting.

Masso's voice choked with emotion as he explained his despair signing up for an indigenous language course at his high school but instead being sent out to pick berries.

"The next week we just kept picking berries and they just chucked them out," he told about 200 people at the Songhees Wellness Centre. "I said, 'Do you want me to do the language because it doesn't really look like we're doing it.'"

Masso said he suggested bringing elders from his community to help with the classes.

"It would be great if we had elders there," he said. "I don't know. I can't really do the language because I'm still learning and if we had the elders there we could do it. It's just silly."

Hjalmer Wemstob, a B.C. Assembly of First Nations representative, said his brother represents a groundswell of desire among young aboriginals who want to know and preserve their culture.

"This man is hope and change," Wemstob said about Masso as people at the gathering, including the minister, stood and applauded.

School District 70 superintendent Greg Smith said the high school in Ucluelet has a Nuu-chah-nulth studies course for students in grades 8 to 10, but the course is a general studies class and not strictly a language course.

Smith said students in the class have a broad knowledge of indigenous culture and issues but Masso is far ahead of most students when it comes to language so the school enlisted him to help with the language portions of the class.

"You are a very powerful person," she said. "I will need your help in getting this right."