Independent review board to probe actions of Mounties in seniors' arrest 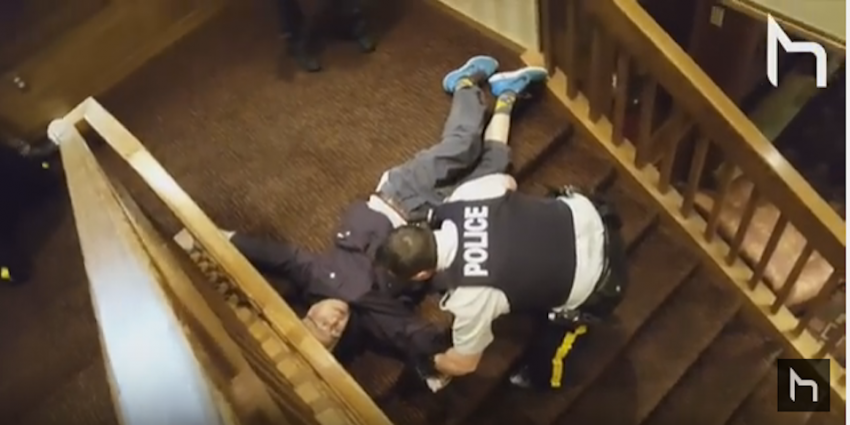 Screen capture from a video shot by Victor Kim/YouTube.

An independent RCMP review board has launched an investigation into how the Mounties handled the arrest of an elderly couple in the Vancouver-area last week.

A widely publicized video posted online appears to show an officer dragging a man down a staircase while another officer arrests a woman, who appears at one point to fall.

RCMP have said in a statement that officers were called Wednesday evening over reports of fighting at a tenants meeting, and officers arrested an elderly couple, who reportedly refused to leave.

Richard Evans, senior director of the Civilian Review and Complaints Commission, said the agency received several complaints about the arrest, both from people involved in the situation and people who saw the video online.

"Based on that number of complaints and, quite frankly, just on watching the video itself, the chair person (Ian McPhail) determined it was in the public interest to launch an investigation," Evans said.

The probe will be headed by the commission's Vancouver office and will look at whether members of the Coquitlam RCMP used good policing practices during the arrest.

Questions that could be asked include whether use of force was applied properly and whether there were any other ways to de-escalate the situation, Evans said.

"It's more about policy and procedures around police practices," he explained.

The commission cannot recommend criminal or code of conduct charges.

New Westminster police have also been called in to do an external investigation that will look into the entire incident, including the actions of the officers. That investigation will determine whether or not the Mounties involved may have committed a criminal offence, Evans said.

Sgt. Jeff Scott, a spokesman for New Westminster Police, said it's not uncommon for an external agency or department to be called in to investigate an incident where police are involved.

"Our dept is looking at this and treating this how we would treat any other type of investigation by being fair to everybody involved and looking at this from a perspective of total objectivity and impartiality," he said.

Scott said it's too early to know how long the probe will take or what type of recommendations it may lead to.