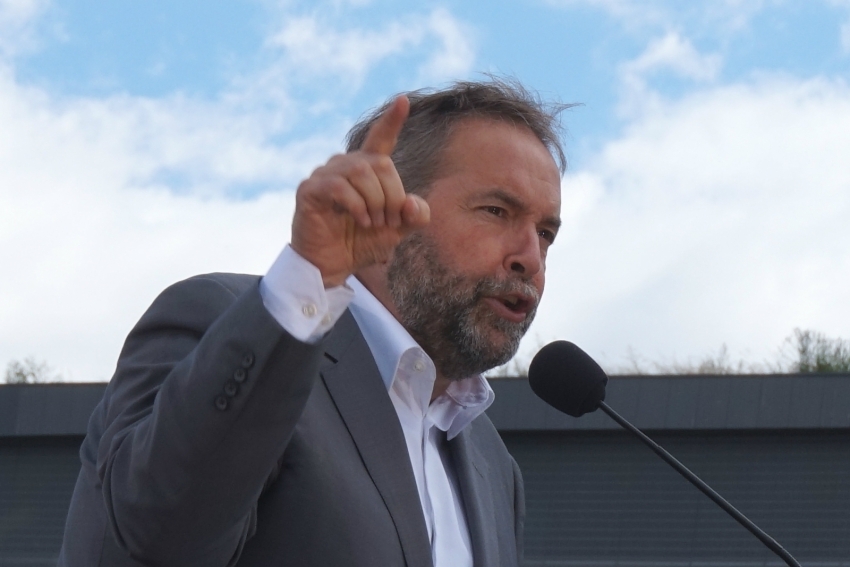 Thomas Mulcair pledged once again to launch a national inquiry into Canada’s more than 1,200 murdered and missing Indigenous women at a campaign rally in Vancouver on Sept. 13 just 36 days before Canada's 2015 federal election.

"I stand committed to launching an inquiry into missing and murdered Indigenous women....because we believe Indigenous lives matter," he said, to loud cheers from his audience.

Mulcair kept up the pressure on Prime Minister Stephen Harper, who has consistently ignored demands for an inquiry into the hundreds killed or missing, who said last year that the issue “isn’t really high on our radar, to be honest.”

From Harper’s first election in 2006 to May 2015, nearly 300 Indigenous women have been murdered, died under suspicious circumstances, or have gone missing, according to data collected for the Aboriginal Peoples Television Network by researcher Maryanne Pearce.

Mulcair has previously promised an inquiry into the cases of murdered and missing women within 100 days of an NDP government taking office, as well as pledging to end violence against women, one year after the slaying of Winnipeg teen Tina Fontaine.

But Canada is now facing international pressure for its failure to combat violence against First Nations women, most recently from a damning United Nations report released by the International Covenant on Civil and Political Rights over the summer, which re-iterated calls for a national inquiry.

“The State party should, as a matter of priority, (a) address the issue of murdered and missing indigenous women and girls by conducting a national inquiry, as called for by the Committee on the Elimination of Discrimination Against Women, in consultation with indigenous women’s organizations and families of the victims; (b) review its legislation at the federal, provincial and territorial levels, and coordinate police responses across the country, with a view to preventing the occurrence of such murders and disappearances; (c) investigate, prosecute, and punish the perpetrators and provide reparation to victims; and (d) address the root causes of violence against indigenous women and girls,” stated the report.

But Mulcair and his rivals also face pressure of a different kind: that of four million Syrian war refugees, many of whom are streaming into Europe in their thousands, while some have Canada in mind as a safe haven.

Mulcair said Canadians need a "Prime minister who understands the urgency to act as crises unfold" and said Canada under the NDP would welcome 46,000 Syrian refugees over the next four years, thereby fulfilling its United Nations obligations.

So far, less than 2,400 Syrians have been admitted into Canada since civil war first broke out in 2011.

Germany by contrast is expecting to take in 800,000 refugees by the end of this year and many have already made the hazardous journey through Turkey, the Balkans, and central Europe to reach sanctuary, braving rough seas, hostile border guards, and hunger to escape their war-torn country.

"I believe in taking action on climate change today, so we don't leave an environmental debt to our children," said Mulcair.

Mulcair once again avoided committing to any concrete greenhouse gas emissions reduction target, just two months before the Conference of Parties (COP) 21 talks in Paris are due to begin.

Speaking at the Aug. 6 Leaders’ Debate in Toronto, Mulcair vowed to play a constructive role in Paris if elected prime minister, but did not mention any emissions target.

But the NDP has promised to shift federal subsidies from oil sands industries to renewable energy and clean technology development, as well as taxing polluters for the environmental damage they cause.

Mulcair has also promised proper consultation and study before approving any major energy project such as Kinder Morgan’s proposed Trans Mountain expansion between Edmonton and Burnaby.

A leg-up for the poor and seniors

Returning to more ‘bread and butter’ domestic issues, Mulcair restated his party’s promise to roll out a $15 minimum wage to help lift working families out of poverty, alongside new taxes for the wealthy.

“I stand for a $15 minimum wage,” said Mulcair, adding that people working full-time hours should not have to live in poverty.

Mulcair also promised that if an NDP government were elected, he would close a tax loophole loophole so that the wealthy would contribute tax dollars toward programs for feeding hungry children.

"Just a few months ago at the Broadbent Institute I got a chance to talk about tax loopholes, and the rich. Right now, there are a select few who benefit from a tax loophole for stock options. At the same time, in our country, hundreds of thousands of children will go to school without having eaten."

The NDP leader then attacked Harper for cutting federal health transfers, also taking a swipe at his Liberal predecessors for slashing billion in such transfers during the 1990s.

Mulcair also made his pitch to seniors and those Canadians struggling to access affordable medicines and mental health care.

"We're going to be focusing on four key elements - improving care for seniors, improving access to care at home, a comprehensive national strategy on mental health, and reducing the cost of medication,” said Mulcair to cheers. “We will relieve pressure on overcrowded hospitals so they can provide emergency care to those who need it most.”

With files from Jenny Uechi

'Am I Next?' campaign urges Harper for inquiry into murdered native women