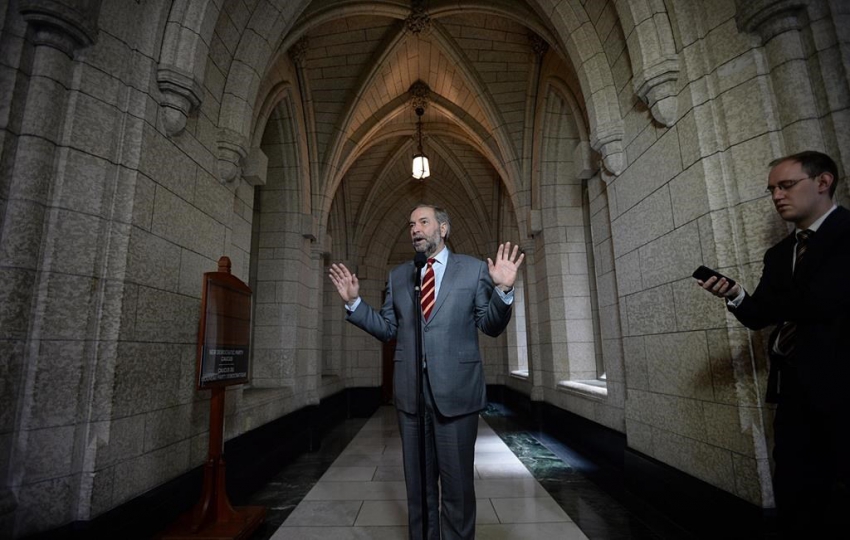 Thomas Mulcair told reporters he was concerned about report, and the fact the Chief of Staff told subordinates to ignore it

OTTAWA — The military accepts and will implement all 10 recommendations from a hard-hitting report on sexual misconduct in the military, Defence Minister Jason Kenney said Wednesday.

And he said the government also intends to introduce a victims' bill of rights for the military.

The government went on the offensive as opposition politicians responded to a CBC report which suggested the military was ready to ignore some recommendations from the sexual misconduct inquiry.

NDP Leader Tom Mulcair and Liberal Leader Justin Trudeau said they were concerned about the report, which said Canada's chief of the defence staff told the military to be prepared to ignore certain recommendations.

The CBC said that even before the report by retired justice Marie Deschamps was made public, Gen. Tom Lawson told senior officers to disregard some of her recommendations.

But the military officer appointed to address the report said from the naval base at Esquimalt, B.C., Wednesday afternoon that she is not under any orders to sidestep some of the recommendations.

"I'm moving out in all 10 recommendations as discussed with the chief of defence staff. I'm a little surprised at the feeling I've been somehow constrained by my mandate."

Among other things, Deschamps recommended that an independent agency be set up outside the military chain of commend to handle sexual misconduct complaints.

Whitecross said she is preparing a comprehensive option on an independent agency, is currently meeting with members of Canada's military and will review similar centres in the United States, Australia and France.

"The first thing we are doing is trying to change this culture by talking to members of the Canadian Armed Forces so we can start realizing that words hurt and inappropriate jokes won't be tolerated," she said.

The military initially accepted all of the recommendations "in principle," but Kenney made it clear Wednesday in the Commons that all of them would be implemented.

"The Canadian Armed Forces has accepted not two, but, once again, all 10 of the recommendations made by Madame Justice Deschamps." he said in question period.

Later, he told the Commons defence committee that a victims' bill of rights for the Forces has been in the works for a year or more and will be introduced soon.

"The government intends to bring forward amendments to the National Defence Act that would mirror the Victim's Bill of Rights recently adopted by Parliament, in military law," he said.

"That would strength procedural rights for victims of sexual aggression and other crimes in the Canadian military."

Justice Minister Peter MacKay, meanwhile, said there may be ways to take some sexual assault cases out of the military justice system entirely and deal with them in the regular courts.

MacKay said he's been looking at ways to deal with some tricky cases and has discussed the situation with the judge advocate general, Canada's top military law officer.

"There should be perhaps a protocol or a consultation that takes place between Crown prosecutors and the military justice system when those cases could be tantamount to a criminal charge, rather than something that is done more administratively through courts martial and courts martial appeals," MacKay said.

During question period, Prime Minister Stephen Harper suggested that the CBC report may have been based on an outdated document.

"To quote a letter two months before that, and to imply something else, is unfair to the chief of defence staff," he told the Commons.

Kenney said the government and the military reject any form of sexual misconduct, but said it takes time to implement recommended changes.

"It's true that the military has not been able to implement all 10 of these recommendations in the last week, but ... they will do so."