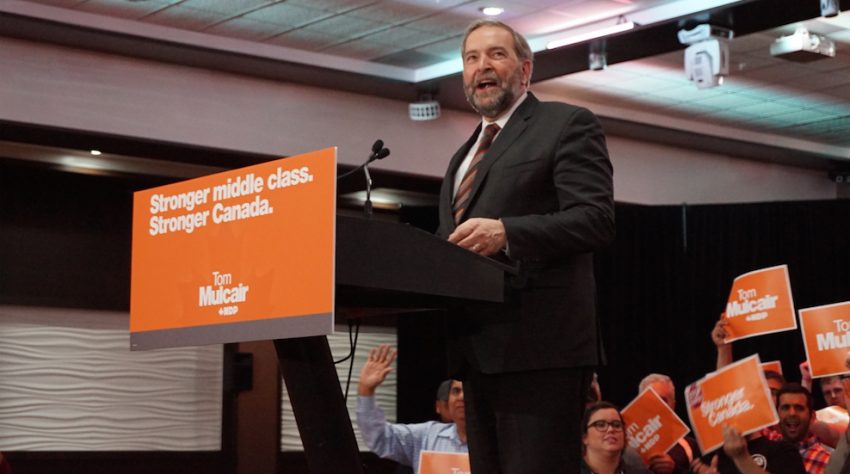 “The Liberals teamed up with Conservatives to pass the dangerous and ineffective Bill C-51... an NDP government would repeal Bill C-51,” NDP leader Thomas Mulcair said, garnering some of the loudest cheers of the evening from a crowd of approximately 1,200 at the Aria Banquet Hall in Surrey on Friday.

The audience’s opposition to the widely protested anti-terrorism legislation was palpable, eliciting boos and cries of “shame!” at its mention.

Critics fear that the bill, passed by the House of Commons and in its third reading, will give security agencies overreaching powers in collecting information on Canadians. In a joint statement of civil liberties and privacy advocate groups, the Canadian Civil Liberties Association said last month the law would be detrimental to “social frameworks, democratic values and fundamental rights.”

In his short and slightly stiff speech under sparkling disco balls, Mulcair was clearly in an early campaign for the federal election slated for Oct. 19 this year.

He reiterated policies that he has showcased over the previous months, including proposals for one million $15-a-day childcare spots opened across the country, a tax cut for small businesses and a federal minimum wage of $15 per hour.

The leader also touted his record as the environment minister for the Quebec Liberal Party, during which he said carbon emissions decreased every year.

The evening's most fiery invective came from Jinny Sims, NDP MP for Newton—North Delta, who during her introduction of Mulcair chastised Trudeau for his support of Bill C-51, which she attributed to a fear of being criticized by Prime Minister Stephen Harper. She and Jaspir Sandhu, NDP MP for Surrey North, took to Harper over what they characterized as a lack of support for the RCMP and gang prevention services in Surrey, which has seen a high number of gang-related shootings in 2015.

“I’ve been waffling between the Liberals and the NDP, and after [Liberal Leader Justin] Trudeau voted in favour of Bill C-51, it made up my mind for me,” said Todd Beernink, a New Westminster resident and instructor at Greystone College, who attended the rally.

Shakti Ramkumar, 18, came to the event looking for clear policy on how the NDP would deal with the oil sands in Alberta.

“[Mulcair] didn’t really clarify that, but what he did say about the environment, I’m optimistic about it,” said the University of British Columbia engineering student, who lives in Surrey.

The party’s supporters were riding a slew of good news in past weeks. The Alberta NDP’s victory, positive polling and a rally of 1,300 in Victoria on Thursday—the party’s largest rally ever in BC, said an NDP organizer—all made for “a collective spring in people’s step,” according to George Smith, Mulcair’s executive assistant.

Mulcair’s visit to BC was partly to talk up BC NDP candidates for the upcoming election as recent numbers appear to show a boost in the party’s popularity in the province.

A poll from EKOS Politics released on Thursday suggested that the NDP would take 29 per cent of the national popular vote in an election today, one percentage point behind the Conservatives and two ahead of the Liberals. The party led the poll for those aged 19 to 49 and also in BC.

On Wednesday, Insights West published a survey of British Columbians in which Mulcair had the highest approval rating among the party leaders with 52 per cent, though Prime Minister Stephen Harper was thought to be the leader who would be the best prime minister.