NEB swamped with 2,000 applicants to speak out at Kinder Morgan pipeline hearings 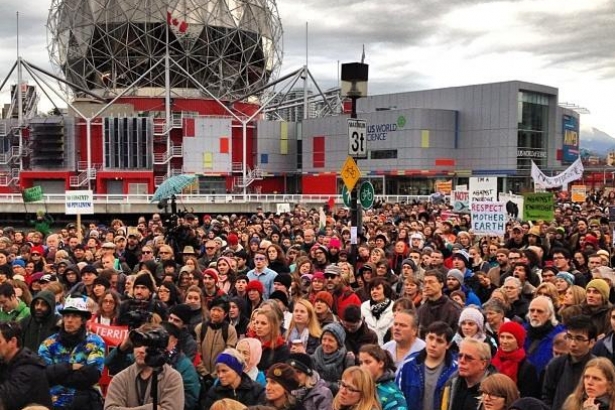 Vancouver oil pipeline protest, Dec.2013. A huge coalition of groups have registered with the NEB to oppose the Kinder Morgan pipeline expansion project.

Today, despite a heavily criticized online process, approximately 2,000 individuals, groups and governments registered before the deadline to apply to participate in a National Energy Board’s hearing into the Kinder Morgan oil sands pipeline expansion project.

Retired schoolteacher, 89-year-old Elsie Dean was one such applicant.

“We just don’t want the oil pipeline coming into Burnaby at all.  We don’t think it’s safe,” said Dean on Wednesday.

“We believe it will have spills, because of the [company’s] record, and we don’t want the Burrard Inlet polluted with dilbit.”

The Trans Mountain pipeline would carry nearly 900,000 barrels per day of diluted bitumen from Alberta to Burnaby, through densely populated areas, and near drinking-source aquifers, homes and school playgrounds.

An NEB spokesperson said Wednesday the large number of applicants is "considerable" but expected.

That huge list includes a fair number of governments: 15 cities including Vancouver, Surrey, Burnaby, Chilliwack, Abbotsford, Kamloops and Edmonton; the Province of Alberta, Washington State, Nicola Tribal Council, and the Township of Langley.  Some of these are not strictly against the project, but Vancouver and Burnaby are.

One group – Parents from Cameron Elementary School – said many families worry about the risk of a pipeline accident hurting their children, who walk near the pipeline, or play in playgrounds as close as 100 metres from the route.

“In case of any spills or accidents during or after the pipeline construction, it would be our children directly affected,” wrote Tongpil Min, a father with a child at Cameron Elementary.

ForestEthics Advocacy, which applied as an intervenor, is encouraged by the large number of applicants.

"Even when faced with a Prime Minister who seems to be obsessed with stacking the deck against anyone who disagrees with him about wanting more pipelines and oil tankers."