Nobody knows how much groundwater we have

Who is using groundwater in B.C. and across Canada—and how much? The questions are vital but answers are hard to come by. 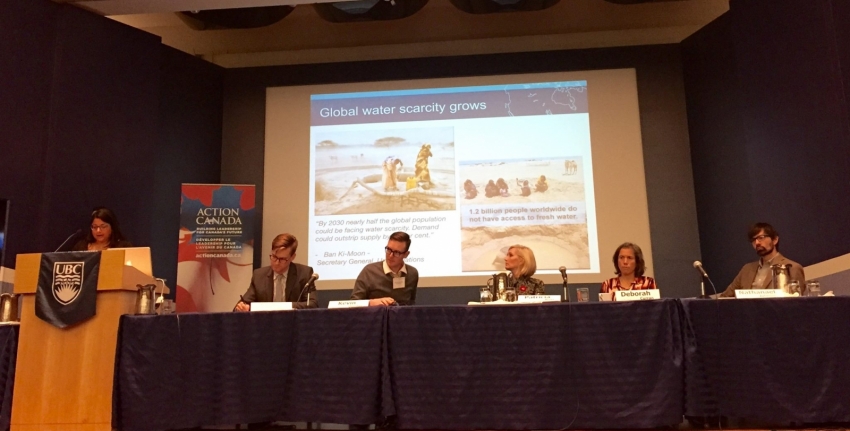 Who is using Canada’s groundwater, and how much are they using?

The answer: nobody knows.

Deborah Curran, the Hakai Professor of Environmental Law and Sustainability at the University of Victoria, says there are no legal regulations to track or control groundwater usage, and that “not a single Canadian farmer knows how much water they use.”

Curran, who is working on British Columbia’s Water Sustainability Act, was on a panel at “Creative Disruption,” a recent Action Canada meeting at UBC’s Robson Square. She shared the stage with Abbottsford Councillor Patricia Ross and California journalist Nathanael Johnson.

“We have an exceedingly antiquated water regime,” said Curran, noting that Canada's federal regulations governing groundwater are the same as they were in 1906.

In a world where 1.2 billion people do not have access to clean water and where water distribution is uneven, this is a local concern that extends out globally, explained Action Canada fellow, Ayesha Harji.

North Americans account for the largest water use in the world, she said, with Canadians using 335 litres a day—a number that is growing, not declining.

United Nations guidelines state that humans need 50 litres of water per day in order to prepare meals and to have enough for personal hygiene. In some places in Africa, people have less than 20 litres.

Nathanael Johnson writes for Grist, usually about food, but also about water in California, where drought has forced 15 per cent of California’s agricultural lands— approximately one million acres—to become fallow.

Johnson told the story of an eleven-year old girl in a poor Central Valley farming community who has to walk to a nearby church for her showers. “There have been real places of crisis. They are just discreet and unevenly distributed,” he said.

“We should have determined who was vulnerable earlier and how to protect them… so that it was not survival of the most powerful.”

After years of denial about the existence and consequences of the ongoing drought, California became the last state in the western U.S. to have groundwater regulation, explained Johnson. The laws that control water usage will be phased in over 20 years, he said, and in the meantime there will be more suffering.

Abbotsford Councillor Patricia Ross, meanwhile, is concerned about the aquifer in her riding. Abbotsford provides 40 per cent of the province’s agriculture and the groundwater is critical for watering Fraser Valley farms.

The Abbotsford-Sumas Aquifer, which crosses the U.S. Canadian border, provides much of the water for farmers. Though the people of Abbotsford once saved this aquifer from pollutants from a proposed energy plant in the U.S. in an epic David and Goliath battle, Ross says the aquifer is threatened by climate change, pollutants in the soil and unmonitored water use.

There must be coordinated efforts and regulation between the three parts of the government in order to protect the aquifer, she said. Provincial and federal regulation “is almost non-existent” and monitoring and enforcing need to improve, she continued.

Aquifers are at risk, said Curran, and we don’t have any scientific data on them.

But Curran does not want the federal government to “jump into water management” provincially. Each ecosystem is unique and requires local understanding for successful regulation, she explained. In B.C., for example, we have a desert-like biome in the Interior, and coastal rainforest that receive the most rainfall in Canada.

The number one problem with water usage is that there is “no overt right to water for Aboriginal populations,” said Curran. “The province behaves as if there isn’t this already existing right of Aboriginals to water.”

Unlike in the U.S., where water is a property right, in Canada water is regulated in the public interest and the government can regulate it to a high degree. Water is not a property right but a use right, owned by the province, except for Aboriginal rights, explained Curran.

A Water Sustainability Act in B.C. will function in several ways, protecting groundwater while setting in place needed legal frameworks. While creating the laws, regulation would begin in the Okanagan and eastern Fraser Valley. The Act would create water sustainability plans where people could come together and agree on how to adapt. It would be phased in over 30 years to allow for amendments and review of and changes to licenses.

The federal government can help by setting performance standards, becoming responsible for reserve water or drinking water, and funding groundwater science, said Curran. She also said that the Fisheries Act should simply be reinstated.

“California’s biggest crop is lawns,” said Johnson, adding that cities in California were able to cut their water usage by 25 per cent. Curran agreed that individuals play a huge part in consumption, and that cities should “institute block pricing” for water. Water needs to be metered and, she believes, and water rates should be doubled for industrial use.

“The solutions,” said Johnson, “are boring and tedious and require spending hours and hours in meetings.”

In California, “groundwater law basically is saying you can’t take anymore water out of the ground than goes in every year, and we will let the individual watershed, water districts figure out how to do that,” he said.

Wake up to your wasteful water use, Vancouver — expert

Fracking: US requires disclosure of chemicals for oil, gas drilling on public lands