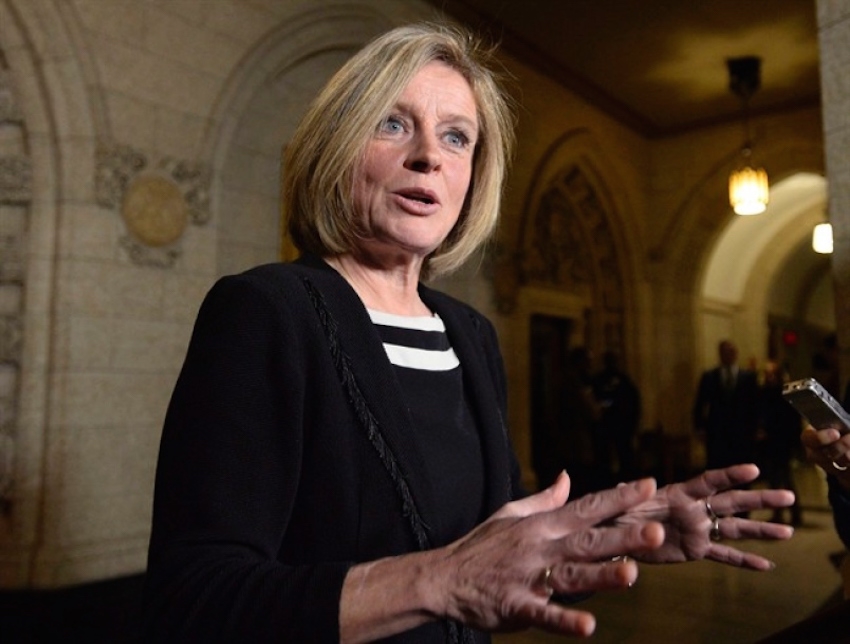 Alberta Premier Rachel Notley during a media availability in Ottawa, November 2016. Photo by The Canadian Press.

Some observers say Alberta's premier will have a difficult job trying to convince British Columbians to support the Trans Mountain pipeline project between the provinces as she began a two-day visit to B.C. on Monday.

Rachel Notley appears to be taking a low-profile approach to her sales pitch. Her itinerary doesn't include any public speaking engagements and she isn't meeting with Premier Christy Clark, who has attached conditions to her government's support for the Kinder Morgan project.

She has scheduled interviews with media outlets to discuss the pipeline expansion, which received federal approval last week to triple the amount of oil already flowing from Edmonton to a marine terminal in Burnaby.

Notley released a statement to mark the start of her visit, saying Alberta and British Columbia share "deep ties and common values."

"The Kinder Morgan pipeline offers an opportunity to show that a strong economy that benefits working families and world-class environmental standards go hand in hand. I look forward to having thoughtful and constructive conversations about the mutual benefits the project will bring to our two provinces."

Notley's office said she will meet Clark in Ottawa later this week during a first ministers meeting. Clark said last week that the federal government is close to meeting B.C.'s five conditions for approval of the pipeline.

Green Leader Andrew Weaver challenged Notley to a public debate on the project, saying she is not engaging with British Columbians during her trip.

Notley's visit is all about making deals to gain the provincial NDP's support for the pipeline expansion, he said.

"It's not about British Columbians, it's about political calculations, and that's what is so frustrating for so many people in Canada," Weaver said.

A spokeswoman for Opposition NDP Leader John Horgan said he will meet with Notley because the two are old friends, but the party remains firm in its opposition to the Trans Mountain project.

Weaver said there's no way the majority of British Columbians will ever support the pipeline expansion because it will dramatically increase tanker traffic off the coast.

"The risk-reward is just not worth it for those of us who live in coastal British Columbia," he said.

Notley has a lot of work to do in convincing environmentalists that the pipeline expansion should go ahead, said David Tindall, a sociology professor at the University of British Columbia.

"To some extent, I guess both Trudeau and Notley can say, 'Look, we actually have policies for reducing climate change and we're actually trying to make a difference,' " he said, adding that for many environmentalists it will come down to whether those policies are effective.

"I think most environmentalists are quite skeptical of that."

Environmental groups and First Nations have promised to continue their vocal opposition to Trans Mountain with court challenges and protests.

Not all observers believe Notley's promotional tour is futile, however.

Iain Black, CEO of the Greater Vancouver Board of Trade, said the visit gives Notley an opportunity to explain how a healthy energy sector allows for investment in communities.

"You're not building roads and hospitals and schools on the tax revenues from a latte," he said.

Notley should use the visit as an opportunity to show people how Trans Mountain fits into Canada's broader economic picture, Black said.

"We're part of a Canadian economy here. I think we have to remember that. It doesn't mean that we back down on our concerns, but it means we have to understand the context of the conversation," he said.