Despite the optics, the street market has a policy against selling stolen goods and instead tries to encourage the sale of found, refurbished and recycled items and handmade goods. 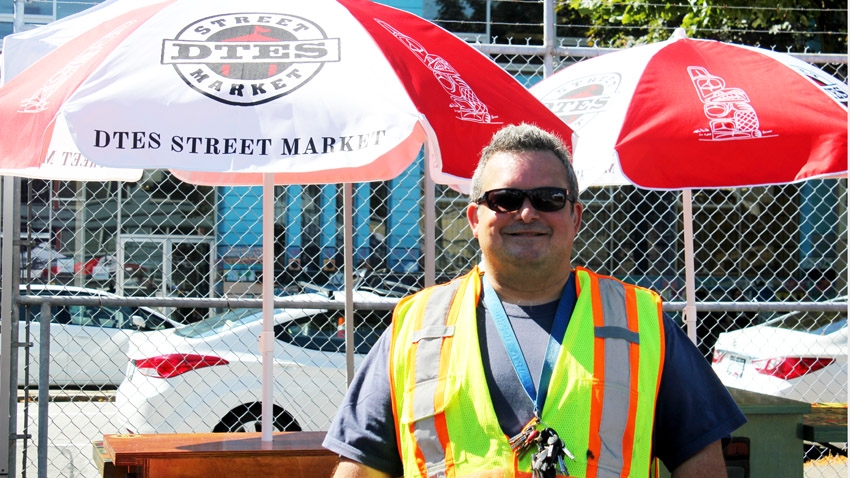 In the summer of 2010, the same year that the DTES Street Market was established in Pigeon park at Carrall and Hastings, Roland Clark was living in a homeless shelter. Soon he and his friend became market customers.

“We learned that it was a place to go to get cheap items if you needed to furnish your new SRO (single room occupancy unit). You could buy things cheaply there even if you were on welfare,” Clark told the Vancouver Observer. “We started to get involved with it organically because it served us personally as low-income shoppers.”

Now, five years later, Roland Clark is a volunteer coordinator of the DTES Street Market Society. He has a meaningful understanding of the neighbourhood he works in and is an instrumental leader in next week's relocation of the Sunday market from Pigeon Park east several blocks to Oppenheimer Park, 500 block of Powell Street.

The move reflects a desire to promote a “vibrant inclusive local economy” which includes support and expansion of the market, part of the long-term strategy for the DTES Community Economic Development Plan that was adopted by city council in 2014.

Personal safety was another reason behind the Downtown Eastside market’s move; the enclosed area at Oppenheimer park is easier to monitor, with fewer access points and less “porous,” in the words of Vancouver Police superintendent Michelle Davey. It’s also anticipated that more market days and increased space for up to 230 legal vending opportunities will expand economic opportunity for low-income vendors.

Clark shared with city council the economic success that the market already has while operating one day a week.

“Ten thousand dollars in commerce is done on an average Sunday,” he explained. “It costs us around $1,000 to run the market. So if you think about a social program, or social enterprise, we have a 10-to-one multiplier versus the cost of running the enterprise and the social return on investment.”

The market’s move hasn’t been without criticism, however. A petition labeled “Stop the Junk Market” was set up shortly after city council decided to move forward with the relocation. Local businesses, places of worship and residents near Oppenheimer park have also expressed concerns about noise levels, illegal vending and safety around the new location.

“Our main concern…is with our employees’ safety,” one local business operator told council. “I don’t think we as a business should feel unsafe for our workers.”

Mary Clare Zak, the city’s managing director of social policy, addressed many of these concerns at a later council meeting. Plans of action include having a police officer liaise with market coordinators during vending hours and hiring security guards through Mission Possible, a social enterprise in the Downtown Eastside neighbourhood. Several of the regular market volunteers are also certified in Basic Security Training and knowledgeable in de-escalating conflict and crisis situations, she explained.

Another criticism of the relocation surrounds stolen goods and illegal vending both within and near the street market — an understandable but unfair association, says Clark, due to the proximity of the illegal vending that takes place around the corner on Hastings.

“People have associated us with the (Hastings) block and sometimes they think we’re defending them or that we’re trying not to clean it up and that’s definitely not the case,” said Clark. “We see ourselves essentially as the progressive solution to what’s going on there.”

With support from the police, the DTES Street Market has a policy against selling stolen goods and instead tries to encourage the sale of refurbished products, recycled items found in bins and even handmade goods from neighbourhood artisans.

“You really see the vendors behaving more like entrepreneurs and businesspeople because they’ve been given a chance,” explained Clark. “That’s what I think is incredible. It’s the part of it that’s really doing economic development for the lowest income and most marginalized people in the city; that’s what we think is a really powerful part of this story.”

The DTES Street Market will have its first market day at its new location this Saturday (Aug. 1), coinciding with the Powell Street Festival that celebrates Vancouver's Japanese-Canadian culture and history.