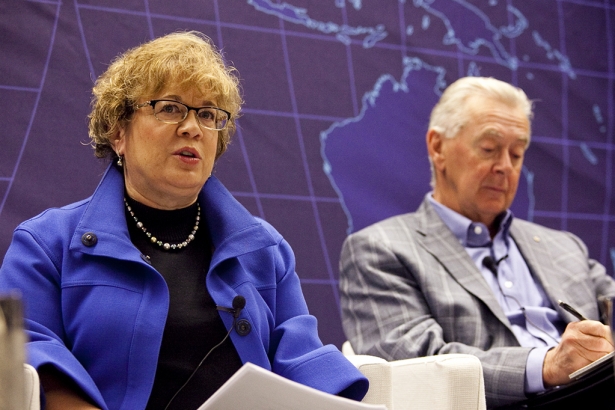 Reform Party founder and conservative icon Preston Manning stepped into B.C. oil politics Thursday, when he appeared to give Enbridge’s vice-president Janet Holder advice on using the lessons of politics in building more support for the controversial Northern Gateway pipeline.

Manning was seated next to Holder at a “GLOBE 2014” conference panel in Vancouver that addressed the challenges of transporting oil.  He told the panel, which included pipeline engineering and railway executives, that large companies need to communicate their projects as if they were trying to “win an election.”

“Imagine that the project name is on a ballot,” said Manning.  “Imagine that the alternatives are on the ballot… and for any of those options to prevail in our current climate in which we live, it needs to win.”

Holder acknowledged people's fears about her company's proposed pipeline range from coastal spills, to caribou impacts, to river crossings.  She said the very vocal feedback from the public has resulted in design changes to the pipeline, and plans to restore natural areas where caribou roam.

But Manning said campaigns have to start early -- "not months down the road after your position has been formulated, but... from the very moment of conception."

Enbridge has been criticized for not building consensus early enough with B.C. Aboriginal communities, many of whom are still hostile to Northern Gateway, and are threatening law suits and "direct actions."

“Hundreds of people call me asking, ‘where do we go to stand in front of the bulldozers to stop Northern Gateway?’" said Art Sterritt, Executive Director at Coastal First Nations earlier this month. 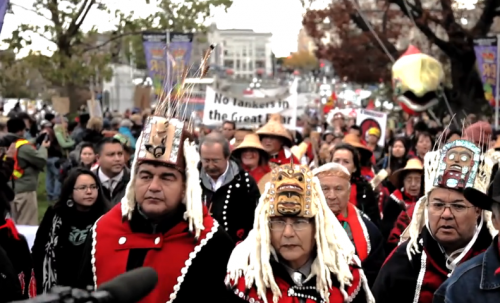 Manning suggested he hopes the public will accept a legal conclusion to such projects.

The Harper cabinet is expected to rule on the Northern Gateway project in June.  The new finance minister, Joe Oliver, recently told a Vancouver crowd that pipelines will be opposed by people who are against fossil fuels "no matter what."

Manning -- whose father was an Alberta Premier who turned the wheel open on Canada's first major TransCanada oil pipeline in 1950 -- said pipelines have a long history of opposition.

But just as in politics, he said, a project does not need everyone's support to move forward.

"Not necessarily a majority... but at least getting a plurality," said Manning.

He also said all campaigns these days -- be it for a political party or a single issue -- are 90 percent communication.

On that score, Enbridge's communications have changed noticeably in recent times.  Its revised website -- Gatewayfacts.ca -- profiles not only the safety and economic benefits of the pipeline, but also attempts to humanize the project with information about the one executive most responsible for pushing the $6.5 billion pipeline forward.