Wet'suwet'en and Unist'ot'en divided on pipelines 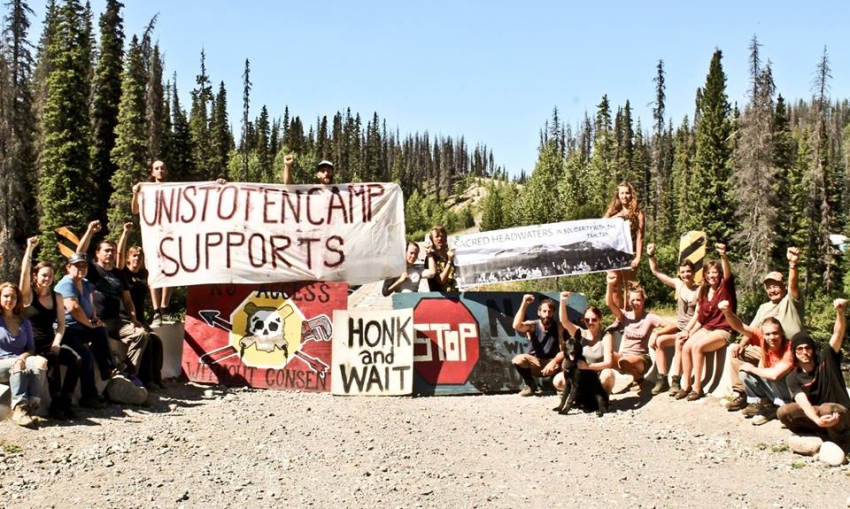 "We have long believed it is short sighted to turn down projects such as the Coastal GasLink project before understanding the true risks and benefits," said Chief Ogen, spokesperson for the First Nations LNG Alliance. "That is just an easy way to avoid dealing with complex issues."

Speaking later with Vancouver Observer, Ogen said she hopes the Unist'ot'en will negotiate with the government chiefs of Wet'suwet'en nations, so together they may come up with a solution that benefits the Wet'suwet'en People as a whole.

“We’d like to be able to sit down with the Unist’ot’en and explain our position and how we can move forward as a nation," she said. “As with any sort of relationship, you can have disagreement; it’s how we come through it, walk through this mutually and respectively — those are the sort of pieces we need to look at as a Wet’suwet’en People."

The Unist'ot'en Camp is located on the shores of Morice River and Gosnell Creek, and several major pipelines proposals — including Enbridge Northern Gateway, Chevron's Pacific Trail Pipeline, and Shell's Coastal GasLink — run directly through its traditional territory. The clan has denied all land access to the oil and gas industry and maintains checkpoints at its territory entry points to keep pipeline workers out.

This is done out of environmental concern, but some Wet'suwet'en government chiefs see LNG (liquified natural gas) as an important economic opportunity to lift communities out of poverty while maintaining important environmental standards.

"The four of us are smaller nations and the funds we get aren’t adequate," explained Ogen, speaking on behalf of the Wet'suwet'en First Nation, Nee Tahi Buhn, Burns Lake Band, and Skin Tyee Nation. "We have poor housing conditions, we have no revenue coming in to fix or repair the existing homes."

Ogen signed a $2.8-million agreement with the province last December in favour of the Coastal GasLink project, and before that, she supported the Pacific Trails Pipeline. The chief came under heavy fire from environmental critics, neighbouring aboriginal communities and hereditary chiefs of the Wet’suwet’en for both of these decisions.

“We’ve been called greedy, we’ve been called sellouts, but no one actually sits down and talks to us about why we signed on. Our nation has come up with a four-pillar plan to assist our communities because a lot of people have this misconception that we’re just taking money and revenue," she said.

Environmentalism means more than 'no'

The chiefs further pointed out that if the Coastal GasLink project proceeded, the Unist'ot'en Camp could continue, as one of the pipeline routes under consideration (requested by the hereditary chiefs) would not conflict with its operations.

By participating in this processes with industry and collaborating with one another, they believe Indigenous people have an opportunity to raise the bar on environmental protection.

"There is no doubt sustainability means protecting our environment," said Ogen, "but sustainability also means ensuring our people have access to real opportunities and a decent standard of living. Sustainability means standing on our own two feet, providing our young people with good paying jobs, and reducing the 40 to 60% unemployment we now experience."

More than 400 individuals and organizations have signed an online declaration of support for the Unist'ot'en and its right to keep pipelines off of its territory.

RCMP say they have no intention of "taking down" Unist'ot'en Camp

Unist'ot'en Camp on "high alert" under rumours of police raid