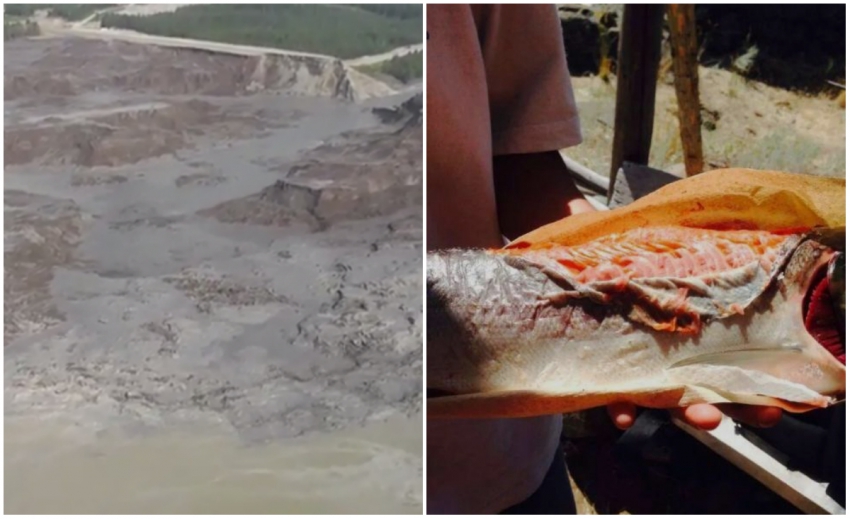 Photo left: screenshot of aerial footage of Mount Polley tailings breach. Photo right: photo by Whispering Pines/Clinton Indian Band chief Michael LeBourdais of salmon caught by Six Mile Lake, downstream from Cariboo River. LeBourdais told media that the skin peeled off when the fish was being wiped with a newspaper.

For years before Imperial Metal's Mount Polley tailings pond disaster dumped 10.5 million cubic metres of wastewater into the Quesnel and Cariboo rivers, Mount Polley Mining Corp. was working on innovative solutions with UBC and Genome BC to detoxify its tailings. While this project (which was partially funded by the federal government) was happening, however, the company seems to have overlooked the need to build an off-site location to discharge its tailings.

The $1.5 million research project, titled "The Development of Genomic Tools for Monitoring and Improving Passive Mitigation of Mine Drainage", involved building an anaerobic biological reactor at the mine.

"The (Mount Polley) mine wanted to discharge water from their tailings pond and was actively looking into ways of doing so safely," said UBC chemical and biological engineering professor Susan Baldwin, who worked on the project from 2008 to 2012.

The project was intended to use microbes to reduce metals in mineral water to less toxic forms. The pilot scale process was successful at removing the metals, but the level of sulphate removed was not as high as the mine had wanted, Baldwin said.

The project involved a number of companies, including a federal funding agency:

“The findings from the genome project are incorporated into our long-term water treatment strategies for metal leaching and acid-rock drainage risks,” Mount Polley project engineer Luke Moger told Business in Vancouver earlier this year. “From corporate and government policy perspectives, this type of technology development is key to the long-term success of Imperial Metals.”

According to Genome BC spokesperson Sally Greenwood, Imperial Metals reported regularly on the progress of the genome project. Those reports are not accessible to the public online at this time.

Baldwin said she and her team have been returning to the mine annually to take samples from the pilot-scale treatment process and that the original plan was to revisit Mount Polley this month. The researchers were only active in the treatment project, and in not in any way involved in the mine's tailings discharge planning.

Nowhere for the water to go?

While the company was proactively working on ways to detoxify the tailings, however, it appears not to have been building emergency locations to hold water outside of the main tailings impoundment. This may have become an increasingly pressing issue this year, with high rainfall in June and July that would have filled up the pond as well.