Snowmobiles can’t access much of the high-elevation winter habitat anyway, but the province is looking to see if action is required. As evidence of the province’s ongoing responsiveness to the caribou’s plight, Bethel mentioned the wolf cull. But he didn’t mention plans for snowmobile closures in low-elevation habitat which, according to scientists, are a source of the predation because packed snowmobile tracks allow wolves to access winter caribou habitat at higher elevations.

According to Scott McNay, there are fewer snowmobilers in the South Peace than in the Selkirks, where people come from hundreds of miles to enjoy the sport. But still, he says, closures of certain areas would help the caribou.

“Many places are closed to vehicle access generally,” he said, “but the public mostly ignores the signage and there’s no enforcement.”

The impact of resource extraction 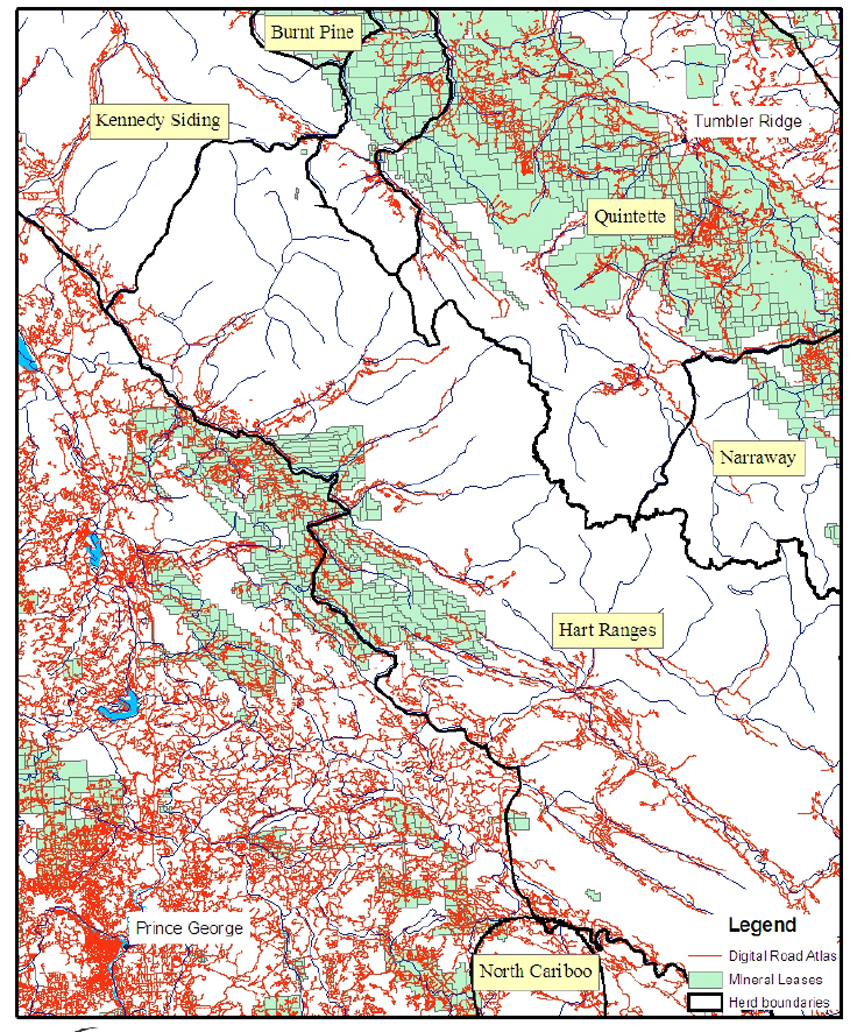 Caribou avoid industrial development wherever possible. In BC, their habitat in riddled with roads, power lines, mines, petroleum-exploration sites and other industrial activities. The Northern Gateway pipeline would cross the ranges of at least three caribou subpopulations.

Over the last ten years, seismic testing (underground shock waves caused by explosions or machinery to determine the presence of frackable gas or oil) has increased at a breakneck pace. Its large footprint displaces caribou, destroys habitat, reduces forage and increases the access of humans and predators along new roads, power lines and seismic testing lines.

The situation appears different in the South Peace than in the Selkirks, where more low-elevation habitat is protected. In the South Peace, according to the 2014 Science Update, energy exploration and exploitation is the most serious threat to caribou: “Present-day energy production and mining are the most imminent industry-related threats to South Peace Northern Caribou and their habitat…. The overall calculated and assigned threat impact that is observed, inferred, or suspected to be directly or indirectly effecting the ecology of South Peace Northern Caribou over the next 10 years is very high (75% population declines.)”

To emphasize the point: scientists anticipate a 75 per cent decline in caribou numbers in the area where the most viable herd resides.

Public Affairs Officer Greig Bethel noted that 426,000 hectares at high elevations are protected from oil and gas activity in the South Peace. Protection at low elevations is less: 93,000 hectares. Moreover, it is difficult to assess the level of protection granted to the habitat or the condition of the habitat.

One thing seems self-evident: if the amount of habitat protected at lower elevations was sufficient to restore the buffer between caribou and wolves, caribou populations wouldn’t be plummeting. And, according to the 2014 Science Update, the province plans for more industrial activity.

"Managing predators" (aka wolf culls) was part of the 2009 Caribou Recovery Plan, but with the acknowledgement that it could only be a stop-gap measure to protect herds while habitat-protection measures took effect. Clearcuts can take from 30 to 100 years to resume suitable food and buffering characteristics, so wolf culls can help caribou survive the regeneration period. In the long-term, the forest habitat itself must control the predator-prey dynamic by limiting incursions of wolves into caribou territory.

Studies suggest that wolf culls are pointless in the absence of adequate habitat protection. A recent study noted in Nature reviewed the results of Alberta's wolf cull of 980 wolves to protect a herd of fewer than 100 caribou. The study concluded that the only way to increase the Alberta caribou herd is to protect habitat with new limits on industrial development.