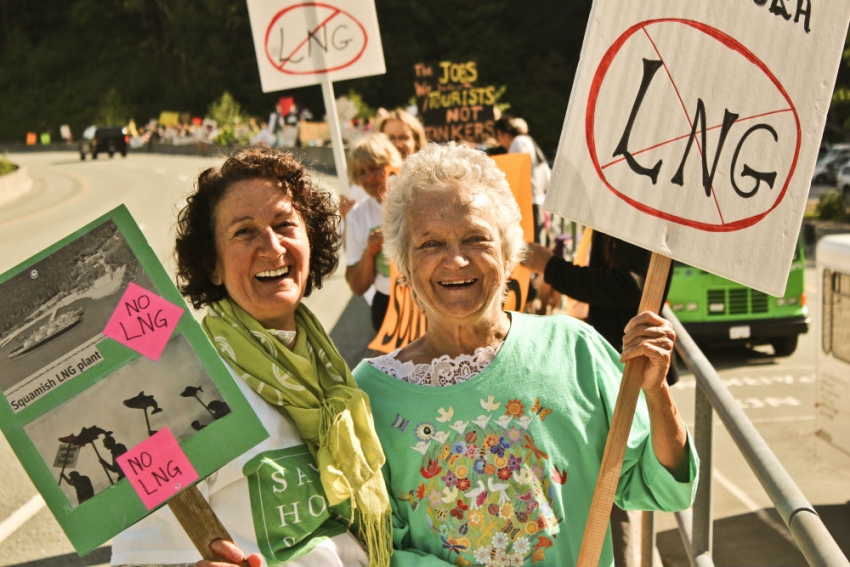 Photo of LNG protest at Sea to Sky gondola. Photo by Desiree Wallace

I never intended to become an activist.

As a marine scientist, climate change has been a big focus of my career over the last 16 years. I’ve worked with governments on their climate plans, people in Louisiana that have seen their way of life disappear under rising seas, and vulnerable Pacific Island Nations that are scrambling to ensure their communities are more resilient to the devastating impacts of climate change.

But over the last five years I’ve also picked up a megaphone to lead thousands of people in a climate uprising.

Why? Because the Canadian government is failing us.

While the rest of the world has been fawning over PM Justin Trudeau, or tweeting about what socks he’s wearing, our Prime Minister has blithely allocated billions of taxpayer money to buy and twin the Trans Mountain pipeline to prop up the Canadian tar sands.

Meanwhile, the provincial government in British Columbia (B.C.) has been recklessly encouraging the development of a new liquefied natural gas (LNG) export industry, which experts say will create more greenhouse gases than coal due to leaking methane from fracking, and delay the transition to renewables.

The recent IPCC report warns us that we have 12 years to avoid climate catastrophe. Scientists have made an urgent call to limit global warming to 1.5°C that will require “rapid, far-reaching, and unprecedented changes in all aspects of society."

Right now, Canada’s policies have us on track for a catastrophic 5°C increase.

The climate plan released by the B.C. government last week is a little ray of hope, with tangible policies to reduce carbon pollution and incentivize renewables, and an accountability mechanism to ensure we get there.

But the proposed 18.9 Mt of greenhouse gas reductions still fall 25 percent short of achieving our legislated 2030 target of 25.4 Mt to meet the Paris Agreement.

And to achieve the new emissions target outlined by the recent IPCC report, we need to reduce B.C.’s emissions by 27.9 Mt by 2030 (45 percent below 2010 levels). That means the shortfall between B.C’s climate plan and where we need to get to according to the IPCC is now a total of 9 Mt.

Luckily, there is a simple solution: projected emissions from the two approved LNG projects in British Columbia (Woodfibre LNG and LNG Canada) are 9.1 Mt annually. We need to pull the plug on LNG.

We simply cannot build new fossil fuel infrastructure when we’re facing a climate crisis. The tax breaks and subsidies that have already been granted to this fledgling LNG industry by both the provincial and federal governments are irresponsible and illogical.

We need to acknowledge the cognitive dissonance of our governments: while we work to reduce our emissions, our Provincial and Federal governments continue to approve new emission intensive projects like LNG. Makes total sense, right?

It’s time to turn our collective megaphones up to eleven. 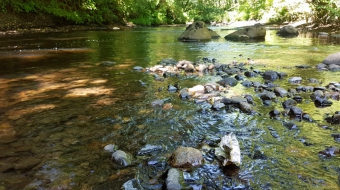