OPINION: "It's the economy, stupid." Stephen Harper calls the 2015 election while Canada heads into recession amidst rising global economic fortunes. Will the public over-ride feuding opposition parties and defeat the Conservatives with strategic voting? 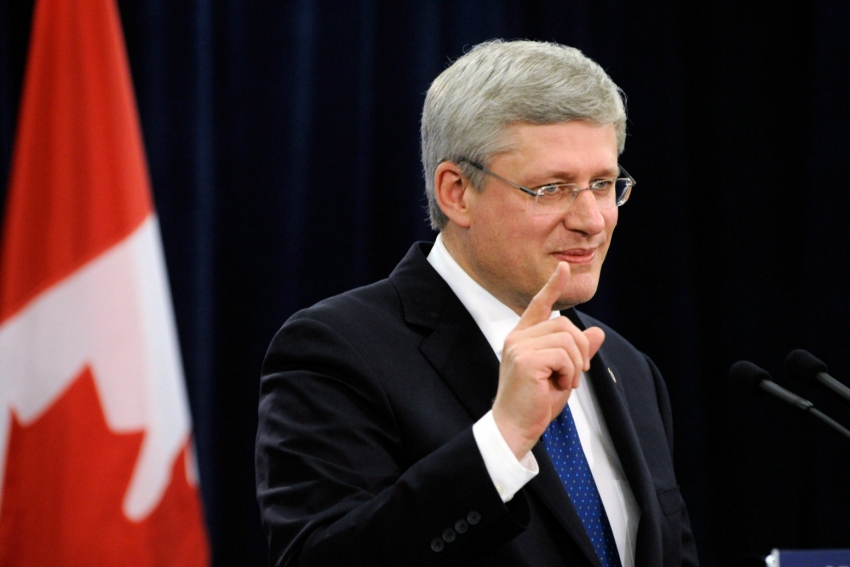 Photo of Prime Minister Stephen Harper by the Canadian Press.

This morning Stephen Harper called the most historic Canadian election in decades, and like all the rest of them, this one will be about the economy.

While the U.S., E.U., G7 and OECD all experience strengthening economies, Canada alone has slipped into recession territory. Worse, the oil and gas sector that formed the keystone of Harper's economic stewardship is hammered by collapsing prices.

No respite is in sight. Iran is poised to open the floodgates on oil supply, as the Saudis continue to pound global prices in an attempt to stem massively increased American shale production. All of this poses a potentially lethal threat to major Canadian oil and gas capital projects that are central to the Harper government's economic growth strategy.

Few saw this coming, although Harper's premiership of the Canadian economy has long been marked by hubris and tunnel vision. He's been a vastly better politician than economist.

In 2006, the freshly minted prime minister declared that we are witnessing “Canada’s emergence as a global energy powerhouse — the emerging ‘energy superpower’ our government intends to build.”

Indeed, the one outstanding feature of the Harper economic plan is its narrow focus on Alberta oil fortunes. Despite the truism that prosperity depends on diversification, despite a Canadian manufacturing sector in parlous circumstances, despite early signs of an impending fossil fuel glut, this prime minister put all his economic oil in one basket.

Worse, Harper never foresaw that his pugilism against scientists and environmentalists at home would turn Canada and into such an easy political target abroad. Today's election call comes as Obama pivots to climate change as the final pillar of his presidential legacy, while we stand isolated on the world stage as a symbol of climate intransigence.

And so Canada is pitched headlong into calamity while low energy prices stimulate economic growth everywhere else. This election will be a national referendum on Stephen Harper's economic leadership.

Will a divided opposition snatch defeat from the jaws of victory, or will the public seize their moment to vote strategically?

Although roughly two thirds of Canadians do not want to see the prime minister re-elected, their division over the alternative might keep him in power. Rivalry between centre-progressive parties has maintained Harper's dominance for close to a decade, and threatens to do so again.

The public, which leans toward fiscally centrist and socially progressive policies, has much less interest in the in-fighting between the NDP and Liberal opposition parties than party executives imagine.

Their oscillating fortunes may appear to be triggered by major policy differences on "high-information" issues such as C-51, but more likely indicate a shifting zeitgeist as voters look for Mulcair or Trudeau to clearly break out of the pack. And a deeper malaise is at work. Striving ambitions and feuding between party apparatchiks have denied Canadians something which they so fervently desire: a single clear alternative to Harper's hard-right ideology.

Those divisions threaten to hand defeat to centre-progressive Canadians again.

For most politically active among their number, priorities will be about C-51 or the environment. But these are divisive "preaching to the choir" issues that escape the overwhelming majority of voters.

This election will be decided by two factors: how swing voters perceive Stephen Harper's economic record; and whether strategic voting by grassroots voters can defeat his plan to once again divide and conquer the opposition.

In the coming weeks, the Vancouver Observer will follow the strategic voting issue closely, and provide riding by riding information to the Metro Vancouver region.