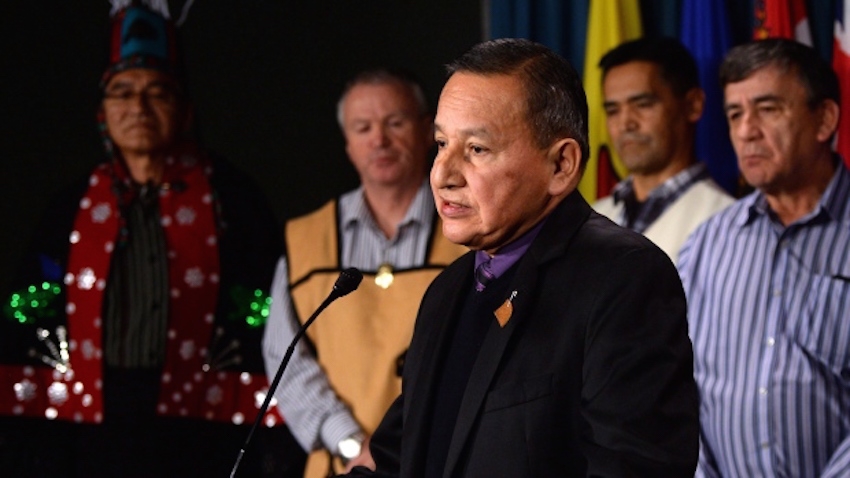 Grand Chief Stewart Phillip, President of Union of BC Indian Chiefs show in a photo from April 2015. Photo by Sean Kilpatrick/Canadian Press.

From April 28th to May 9th nearly two million British Columbians took to the polls to give expression to their deep concerns relative to the previous sixteen years of a BC Liberal majority rule.  Clearly, Sixty percent of those British Columbians have overwhelmingly voted for change.

British Columbia’s economy has become reliant on an industry propped up by a temporary and transient workforce precariously perched on archaic notions requiring the complete destruction of our pristine air, land, and waters, and on an industry which runs rough-shod over the democratic and human rights of Indigenous and non-Indigenous communities alike.

British Columbians demand a different way of governing and have called for a dramatic shift from protecting foreign corporate interests to ensuring the health, safety, well-being and the long-term, sustainable livelihoods of our families and communities.

The Union of BC Indian Chiefs (UBCIC) calls on the newly elected government of BC to enact the change British Columbians have called for. More specifically, we call on the government of BC to immediately implement the United Nations Declaration on the Rights of Indigenous Peoples, to enact the 94 Calls to Action of the Truth and Reconciliation Commission, and to begin to implement the principles and provisions of the Supreme Court of Canada’s ruling in Tsilhqot’in Nation v. British Columbia.

The Province’s piecemeal approach of agreement making with First Nations across BC can no longer stand in place of recognizing Indigenous peoples’ Inherent Title, Rights, jurisdiction and especially First Nations’ right to consent.

First Nations have called for significant engagement that is both genuine and meaningful.

Further, we must work together to address the destructive policies and practices permeating the state of child and family care in BC. A new BC government must not only provide safe healthy environments for children but must ensure future opportunities for their growth and development, to do so we must address the funding and resourcing shortfalls of First Nations education and health care services throughout the province.

Homelessness and affordable housing must also become immediate priorities of the new government. BC must also take significant movement to address and effectively end the devastating opioid crises gripping numerous BC communities.

The new BC government must make great strides to rebuild the trust of British Columbians and to protect the future of our environment and our communities.

On behalf of the UNION OF BC INDIAN CHIEFS