Opposition parties must be bold on climate ahead of federal election 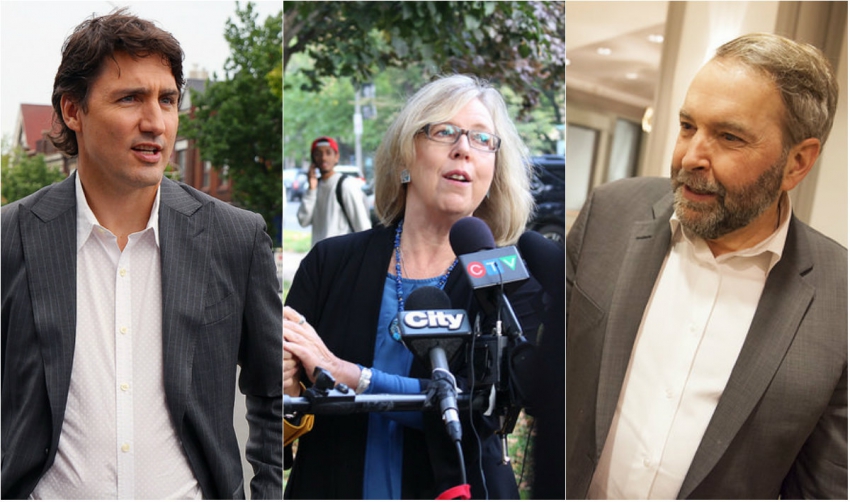 Eighteen years ago in Kyoto, the developed world agreed that our greenhouse gas emissions (GHGs) should be six per cent less than the 1990 baseline by 2005.

Then a series of things happened: the most powerful industry in the world responded with an expensive marketing and disinformation campaign. Canadians elected Stephen Harper as Prime Minister. Canada became the only country to ever legally withdraw from the Kyoto Protocol. And today, our GHGs are 25 per cent higher than they were in 1990, with signs of continuing to rise.

Many Canadians are opposed to a continuation of energy business-as-usual. Policies and investments that only support tar sands, fracking, deep water arctic drilling, coal mines, pipelines, LNG plants, and ocean tanker traffic are delaying the transition to clean technologies and sustainable economic models.

These policies are also putting our air, water and climate at serious risk. There is an urgent need for a deep transformation, and many are looking for leaders who advocate the environmental equivalent of a New Deal from the 1930’s, or the Marshall Plan that rebuilt European economies after the end of World War II.

Neither of our current provincial or federal governments openly contradict the widespread consensus that an increase in average global temperature of two degrees Celsius is likely to result in “dangerous climate change”.  Regardless, they both appear to support fossil fuel business-as-usual, which climate models suggest is likely to bring us to around four degree-temperature rise by the end of this century.

The table below shows a simplified interpretation of science’s greenhouse gas emission (GHG) reduction targets to avoid dangerous climate change, and the commitments our governments have made to date (complicated somewhat by differing baselines per jurisdiction):

Canada must reduce our 1.25 per cent of global GHG emissions by  25 megatonnes per year (5 per cent of our 2014 emissions) to meet the two degree warming targets of mainstream science.

With crucially important UN climate talks scheduled for December of this year, I can’t tell whether certain opposition parties are avoiding this topic because of what happened to Stephane Dion with his “Green Shift”, and to Adrian Dix after his forthright comments on the Kinder Morgan pipeline, or if they don’t fully understand the issue.

Practical plans exist for limiting global warming to two degrees Celsius – on paper from organizations such as the International Energy Agency, and in practice through the policies of governments such as those of the European Union. These plans are based on conscious decisions to support sustainable industries, clean technologies, and smart job creation.

Green Party MP Elizabeth May and B.C. Green Party MLA Andrew Weaver have strong plans to regulate GHG emissions. Although their parties are clearly on the rise, they do not yet have enough support to govern.

Prime Minister Stephen Harper and Premier Christy Clark favour business-as-usual, which science predicts will lead to catastrophe within a few short decades.  I hope Liberal Party leader Justin Trudeau, NDP leader Thomas Mulcair, and BC NDP leader John Horgan will clarify their environmental policies with respect to the following list, so voters can understand what they would do if they were to gain power, specifically:

A few months ago, when three climate denier Republican senators became the chairs of key climate committees in the US, I became very pessimistic about the prospects for our kids and grandkids.

Recently though, there have been significant wins, such as Obama’s Keystone Pipeline veto and large parts of China implementing carbon “cap and trade”, as well as India starting to tax coal (with proceeds going to renewables).

In 2014, annual global emissions of carbon dioxide did not rise for the first time in a year when the global economy grew. With a little luck and a lot of work, we may not have to watch vague warnings of climate catastrophe give way to reports of water shortages, ocean dead zones and agricultural collapse.  Our political left has to start working together; young people are working to get the vote out in 2015, and Canada has to return to using its international influence as a leader on the environment.

If Opposition parties craft their climate policies to not rock the boat (or to avoid alienating a segment of conservative voters and the fossil fuel industry), then we can expect ineffective policies in the years to come. If our would-be leaders are clear and bold about the transformation we need, people will sense commitment, and respond at the voting stations.