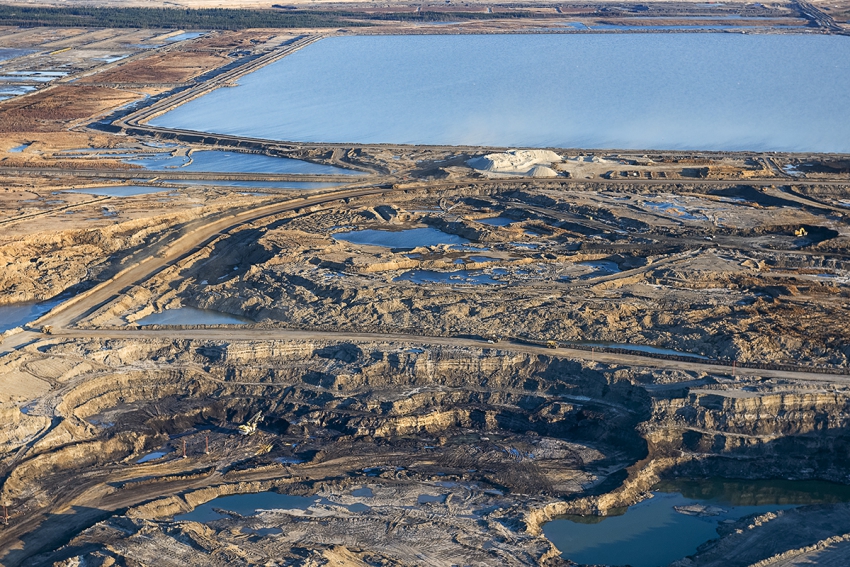 Canada has made international headlines again—and again for all the wrong reasons. It's a pattern that's becoming disconcertingly familiar.

A study published on January 8 in the prestigious journal Nature examined known fossil fuel reserves globally and the climactic consequences of extracting them from the ground. The conclusion is stark. If the world is to avoid catastrophic warming, much of the oil, coal, and natural gas reserves that are already known to exist must be left untouched.

The report singles out the Alberta tar sands as being of particular concern: because the reserves of bitumen in northern Alberta are so vast, unearthing (and then burning) them will have a massive impact on greenhouse gas emissions.

The authors estimate that in order to keep the planet from warming beyond two degrees Celsius—the number the Intergovernmental Panel on Climate Change (IPCC) scientists have set as a target to avoid disastrous climate change—99 per cent of tar sands oil must stay in the ground.  Essentially all of it.

The tar sands have been roundly criticized from all sides for years on multiple different levels. This is the first time, however, that a study has attempted to quantify the consequences should operations continue as forecasted.

Meanwhile, the holiday season has been dominated by reports about the drop in oil prices. The media narrative around the crash is an excellent illustration of the disconnect affecting the discussion surrounding fossil fuel extraction and the environment. In the same news sources that report on climate change, you can find articles on the topic of falling oil prices either preaching impending doom or gleefully expunging the incredible fortune of plunging costs.

The drop, commentators invariably say, will be bad for Alberta's (and therefore Canada's) economy but will increase consumer spending—which is apparently a good thing and means we will burn more oil, in some manner or another, since we will be paying less for it.

The whole thing is odd, to put it generously. The science behind climate change—despite industry and their allies' efforts to discredit the evidence—is uncontroversial and consistent. The planet is in trouble and action needs to be taken immediately. We need to stop burning fossil fuels. Which means we need to stop pulling them out of the ground. The price of a barrel of crude—whether it is five dollars or fifty or five hundred—should not factor into a negotiation over species survival.

The majority of us don't question science's capabilities—whatever we might think of the outcomes—when cutting-edge computers are developed, when ships fly deep into space, when life is cloned, when medicine cures disease, and so on. However, in the case of climate science, naysayers (with an obvious and colossal vested interest that should not be lost on anyone) have somehow managed to sow the seeds of doubt into a Canadian populace that perhaps wants to be doubtful. After all, burning fossil fuels has produced a level of comfort, for some of us at least, that is unparalleled in human history.

It is this unnatural collusion that is, in part, what allows this debacle to proceed, and it also means that we are further compounding an already very dire situation.

The broader picture belies an even more glaring contradiction. Governments everywhere routinely speak of the urgency of climate change (although admittedly in Canada's case the federal government, in a spasm of misplaced honesty, has largely given up this charade) while simultaneously rushing to continue exploiting known fossil fuel reserves and providing substantial incentives for exploration to discover new ones.

According to the Nature report, new discoveries are moot, since the planet cannot sustain the burning of known fossil fuel reserves, let alone new ones. In other words, we have to stop pulling the bitumen out of the ground. Now.

Yet in light of these findings, there appears to be little momentum to stop activities in northlands of western Canada.

But what should be done? Appealing to industry is obviously out of the question. The government is also clearly unwilling to be anything but a partner to the resource extraction industry and so looking to them for leadership in this department is a futile endeavour.

So it is left to the public. Struggles to counter the oil and gas sector in the northern reaches of western Canada have also been underway for years. Such efforts have not been successful, thus far, in gaining mainstream support, much less in stopping the juggernaut that is oil and gas in our country. On the contrary, things continue to heat up.

In light of the enormous profit motive at play for big business and their friends in government, coupled with the significant amount of money the industry injects into the local economy, and given the grim fact that many Canadians are simply too comfortable to join a fight which could be construed as a threat to our astoundingly affluent lifestyle, it is somewhat difficult to be optimistic.

Change happens regardless. But, without mitigation, it may not be the kind of change we will welcome. Crop failures, water shortages, extreme weather events are elements which may become a new reality for the generation born into the world today. So far we have been sheltered from this largely because we are a wealthy country situated in a temperate region. But for how long?

That being said, others around the world are already dealing with climate change in a real way. As some of the richest people in the world, as Canadians it is a more than a little shameful to be such an integral part of the problem. Especially since climate change is a problem that all people worldwide must bear the brunt of, even if for many the mess was not of their creation.