"We Need A Thousand Greenpeaces" 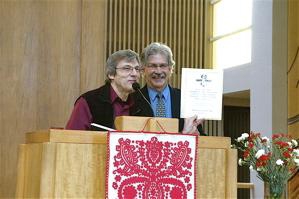 "We must allow, when we consider the future, for the possibility of miracles," Rex Weyler told the congretation at the Vancouver Unitarian Church today, celebrating Earth Day and quoting Lewis Mumford.

Weyler is the author of Greenpeace: How a Group of Journalists, Ecologists and Visionaries Changed the World (Raincoast Books, Rodale Press, Pan-Macmillan), which was published to acclaim in 2004.

Weyler (right in photo above) accepted an award from the church's Social Justice Committee which commemorated the beginning of the Greenpeace organization.

Juergen Dankwort (left in photo above), in presenting the award, recalled that the first Greenpeace meeting ever was held in the church's Hewitt Hall in February of 1970.

Weyler, who came to Canada as a Viet Nam draft dodger and co-founded Greenpeace, eventually serving as its director, sailed on the first Greenpeace whale campaign, and his photographs and news accounts of Greenpeace appeared worldwide.

Calling for a return to common human decency, Weyler noted that half of the earth's forests are gone.

"We need a thousand Greenpeaces," he said.