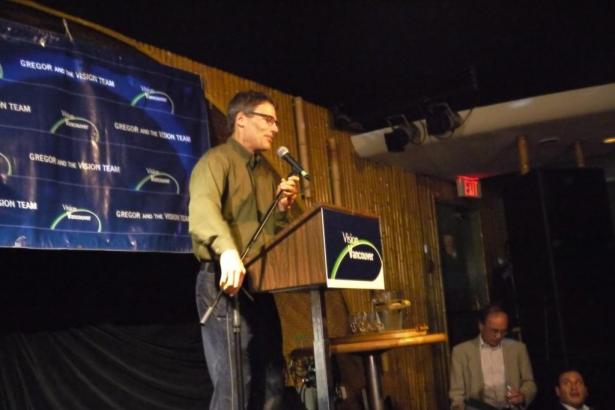 Vancouver municipal election 2011: Job creation, affordable housing, ending homelessness, and making Vancouver the greenest city in the world remained at the top of Vision Vancouver's agenda, as the party kicked off the 2011 civic election by nominating a slate with familiar faces led by a popular incumbent mayor.

Spirits were high at the party that followed  the nomination proceedings which took place Sunday afternoon at SFU Harbour Centre. Candidates and constituents gathered at the Waldorf Hotel on East Hastings to celebrate three years in office and kick off re-election campaigns.

The mayor arrived at the Waldorf past 8pm, and was promptly surrounded by supporters congratulating him on his win. He looked upbeat but serious as he talked about his party's future.

"I'm proud of our record," Mayor Gregor Robertson said. "We've done a great job at City Hall and there's a lot more we're capable of, so I'm looking forward to winning a mandate to keep this good work happening for another three years."

The nomination race, it turned out, was not much of a race at all. Everyone in the running got their place, with newcomer Tony Tang stepping in to replace Councillor George Chow, who is retiring, after serving three terms on city council. Parks commissioner Ryan Clayton dropped out of the Park Board race due to health reasons, with Robert Wynen taking his place. Candidates were relaxed and chatty, sharing their thoughts over drinks with volunteers and supporters.

“I'm thrilled," said Councillor Heather Deal. "I'm sorry to lose three veterans but the new people now in Vision are just great." Deal, who was recently criticized for some tweets she made at a recent FCM conference in Halifax, shared her thoughts about politicians and the dangers of social media.

"As politicians, you have to be aware that you're living in a glass bubble. People are always looking for something to criticize...you have to keep in mind that Twitter and Facebook are not places to chat with friends. I let my guard down (at the Halifax conference)."

Deal is expecting to join Canucks fans and watch Game 6 of the Stanley Cup playoffs downtown tonight, as she did on Friday for Game 5. “I've found the perfect spot to stand in, and I didn't even go to the bathroom or move for the whole game,” she laughed.

“Everything fit together perfectly,” said Councillor Raymond Louie about the Vision Vancouver nomination event. “I think we'll continue to work on issue of homelessness. That's the number one issue. And the environment -- creating jobs in the green economy and our goal of Vancouver becoming the greenest city in the world."

Constituents talked about Vision Vancouver and the city's issues over drinks and Middle Eastern food. A businesswoman woman chatted about how she liked the new bike lanes, but felt that Vision Vancouver needed to do something to increase the safety of the one on Burrard Bridge.

Despite the absence of competition for his spot, Councillor Geoff Meggs said he wasn't taking his win for granted.

"There's always a degree of nervousness when it comes to a democratic race," he said.

Meggs brought up affordable housing, one of the main issues he said that Vancouverites will want addressed as an election issue.

"One of the things that City can do is buy land, and lease it as affordable housing," he said.

Meggs, a former journalist, talked about a recent blog post he had posted about the impact of foreign temporary workers in Vancouver.