Without Jack Layton, "NDP in freefall in Quebec" 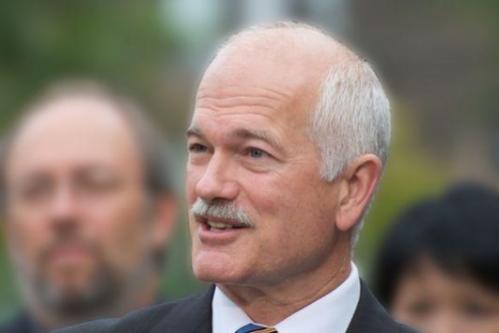 The NDP's orange wave in Quebec appears to have died.

Party support has plunged to 26 per cent -- tied with the Bloc Quebecois and down a full 16 points since the NDP "orange wave" and the late "le bon Jack" Layton swept 59 of Quebec's 75 seats in last May's election.

That's according to a new Canadian Press Harris-Decima survey.

It's the first time since May that New Democrats haven't taken a notable lead in the province in a Harris-Decima survey.

Support appears to have bled off in four different directions: to the Bloc, Liberals, Conservatives and Greens, which have all made modest gains since May.

Nationally, as a comparison, the poll put the Tories at 34 per cent, the NDP at 28, the Liberals at 22 and the Greens at seven.

It was the NDP's unprecedented surge in Quebec last May that vaulted the party into official Opposition status for the first time in its 50-year history. Prior to that, the party had held one seat at most in the province.

New Democrats' dreams of actually taking power in the next election hinge on being able to hold onto the party's newfound base in Quebec. The poll suggests that could be a huge challenge.

``This really is the NDP in free fall in Quebec,'' said Harris-Decima chairman Allan Gregg.

The party has been spiralling downward spiral in Quebec since early October, after peaking in the aftermath of leader Jack Layton's death in late August, Gregg said.. Layton was a particularly popular figure in Quebec, where many Quebecers acknowledged voting for "le bon Jack,'' rather than for his party.

But Gregg said the downward trend has accelerated in the last few weeks, even as the leadership race to choose Layton's successor has heated up with the first two all-candidates' debates. The veteran pollster said he can't recall a party ever losing so much ground during a leadership contest.

"Conventional wisdom is that leadership contests help the party that's holding them, that the more candidates, the bigger the help.''

There are nine candidates vying to fill Layton's shoes and Gregg predicted the race will become more focused on which contender can best hang onto the party's gains in Quebec.

The telephone survey of 2,005 respondents was conducted Dec. 1-12 and is considered accurate to within plus or minus 2.2 percentage points, 19 times in 20. The margin of error for Quebec results is higher, at 4.4.

-- with files from Canadian Press