During a public event at W2 Woodward's, NDP leadership candidate Thomas Mulcair addressed key issues and took criticism over his position on Israel. 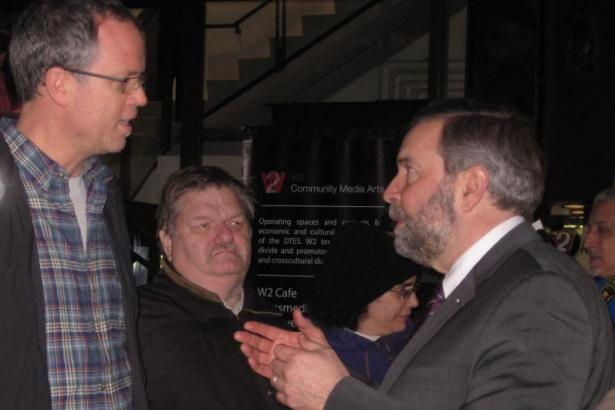 Mulcair speaks to voters after the town hall at W2 Woodward's. Photo by Alexis Stoymenoff

The event was hosted by local collective W2 Media Arts in the chilly atrium of the Woodward’s building and, despite aggressive advertising across town, organizers only managed to fill about half of the seats. Posters on the building’s walls read “Welcome to Mulcouver”, and smiling supporters handed out buttons and donation envelopes.

Arriving fashionably late, the Quebec MP spent little time introducing his campaign before launching into the question and answer period. Right off the bat, one attendee posed a question that’s been on many minds recently: why not cooperate with the Liberals to defeat Harper?

Mulcair’s response was one of confidence—he reminded supporters of major gains won by the NDP in the last election, suggesting that now is the time to capitalize on those gains rather than make compromises.

“Let’s excite people with our ideas,” he said.

“If the idea is to say that the Liberals, Greens and the NDP are interchangeable parts, I disagree."

Mulcair’s view on the subject differs from that of outspoken leadership candidate Nathan Cullen, MP for the Northern BC riding of Skeena-Bulkley Valley. Though Mulcair is reportedly ahead in the polls, Cullen’s calls for cooperation appear to have given his campaign a boost recently due to indirect efforts from groups like Leadnow.ca (who have lined up almost 15,000 Canadians in support of a cooperative strategy).

Schniad asked the MP how his position on Israel differed from that of Prime Minister Stephen Harper, suggesting that Mulcair was more aligned with the Conservatives’ position than with the NDP’s.

“My position is Jack Layton’s position, which is the NDP’s position,” Mulcair replied, explaining the party’s view that both Israelis and Palestinians have the right to live in peace in viable, independent states.

“You’ll notice that in the NDP’s position, the only word that appears twice is ‘peace’. That’s one of our main priorities,” said Mulcair.

He appeared to be treading carefully with his response last night, but Mulcair’s stance on Israel has long been a point of criticism among Palestinian supporters and human rights activists. He has been open with his views about anti-Semitism in his home riding of Outremont, and previously suggested that “anti-Zionist” sentiments are usually accompanied by intolerance. In 2010, Mulcair also made headlines when he attacked Vancouver East MP Libby Davies over negative statements she’d made in an interview about Israel.