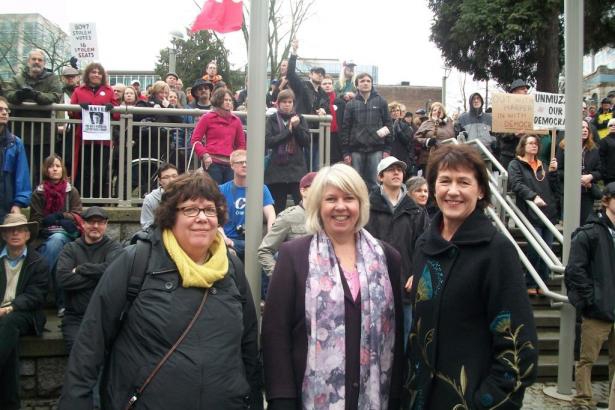 Hundreds gathered at the Vancouver Art Gallery yesterday and marched to Victory Square Park to protest the robocall voter fraud scandal perpetrated by the Harper government in the last election. There were a wide range of speakers that included MPs and spokesmen for several community groups, MPs from the Liberal and Green parties, local poets and members of Leadnow.

“This is not just one more problem for our nation, this is the biggest cases of disregard for democracy in this country I’ve ever seen,”  Adriane Carr, Deputy Leader of the Green Party of Canada, said of the Conservative's alleged voter fraud activities in the last federal election.

Other speakers accused the Harper government of  downplaying the voter fraud scandal and distracting Canadian citizens from the seriousness of it.  Participants and organizers of the protests are looking for a full public inquiry into this event.

A national day of action is being planned for March 11 to continue to put pressure on the Harper government. Many citizens and community organizers said they want to see Prime Minister Harper impeached.  Over 30,000 complaints have been filed to date with Elections Canada.

“This is a building of the coalition, we’ve seen several political groups, civil society groups come together today, and we need to continue putting pressure on Conservative MP’s who are in office due to election fraud. We want to see a general election or see them step down from office,” said Sarah Beuhler, a co-organizer of the robocall protest.