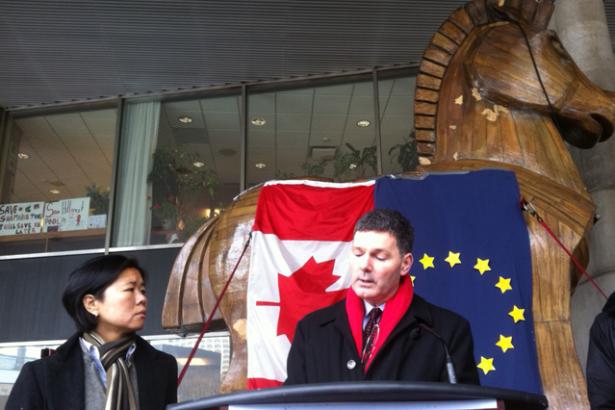 After a wood Trojan horse was delivered to City Hall, Toronto City Council voted to exclude itself from the Canada-Europe free trade deal this year, though the move was largely symbolic.

That's how Canada's international trade department dismissed accusations that its secretive free trade deal with Europe may help privatize municipal water services – or open them up to challenge by multinational corporations, the largest of which are based in the European Union.

Opponents of the Comprehensive Economic and Trade Agreement (CETA) – Canada's close-to-complete free trade agreement with Europe – have raised concerns that municipal water services, and potentially Canada's water itself, may be up for grabs when the deal is signed later this year.

Minister of international trade Ed Fast described CETA as “the most ambitious plan of its kind in history.” But claims that Canada's water is in the deal are absurd, said a spokesperson for the Department of Foreign Affairs and International Trade.

“It is Canada's longstanding position that water in its natural state is not considered a 'good' or 'product' and therefore remains outside the scope of Canada's trade agreements,” said Rudy Husny, press secretary for the department. “Nothing in any of Canada’s trade agreements prevents governments from setting standards to ensure that Canadians have access to safe drinking water, or force countries to privatize or to deregulate their public services.

“Claims to the contrary are hogwash.”

In a rare insight into the state of trade talks, Canada's High Commissioner to the UK – former B.C. premier Gordon Campbell – laughed off suggestions that water privatization was under the deal.

“It's not going to lead to privatization of drinking water,” Campbell told CTV news on Sunday. “We're in the middle of a negotiation, a long-term negotiation – provinces and municipalities have been involved in this throughout.” He insisted that opening up Canada for trade was a "critical part" of the country's future economic health.

BC’s water to be sold to the highest bidder?