Implosion or explosion? What's next for the "new" regime in North Korea?

What's next for North Korea, after the death of Kim Jong-il? 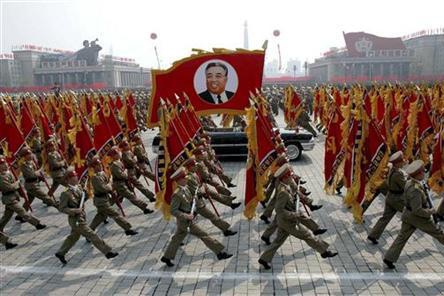 With the transfer of power to "Great Leader" Kim Jong-un, which direction will North Korea's million-man army march next?

One of the biggest stories of 2011 was the death of North Korean leader Kim Jong-il on December 17, followed by the appointment of youngest son, Kim Jong-un, as his successor at a meeting of the Political Bureau of the Central Committee of the Workers’ Party of Korea. This also established him as Supreme Leader of the ruling party and the people of the Democratic Republic of North Korea (DPRK).

Prior to his father's death, the young Kim Jong-un, who has no military history, was speedily appointed in early 2011 as Vice-Chairman of the Central Military Commission of the Workers’ Party.

The appointment was one of the strongest indicators that Kim Jong-il may have believed that his days were numbered, as it was accompanied by a higher-than-average number of state visits by the former leader to Beijing. With initial worries about the ramifications of a possible unstable regime change in DPRK having been stymied as a result of the death, there have also been additional indications within the past days that Kim Jong-un is solidifying his position.

What specifically were the initial worries about a difficult succession?

Many feel that Kim Jong-un is disadvantaged, due to his limited experience, uncertain power base, political barriers towards economic reforms, and the military’s important role in high politics. The peninsular state falls within the sphere of interests of important powers such as China, Japan, Russia, and the United States.

The succession of leadership is a careful exercise in myth-making

Kim Il-sung, purported by state mouthpieces to have been delivered to earth by a white crane, was born in 1912. Although Kim Jong-il was born in 1941, his birth was announced and written in DPRK annals as having been in 1942. North Korea also hopes to announce Kim Jong-un’s birth year as 1982 (his birth year really being 1984), to create a myth of inexplicable significance that demonstrates an equally inexplicable obsession with round numbers. Now, government is already rallying around around Kim Jong-un to fashion him into a figure of the same stature as his predecessors: the state news agency, KCNA, referred to Jong-un as “Great Leader”, a title previously reserved exclusively for his father (Kim Il-sung, the nation's founder and Kim Jong-un’s grandfather, was meanwhile referred to as “Dear Leader”.)