Stopping the fossil fuel juggernaut in its tracks

Will British Columbians be able to stand up against the Premier's "unbridled boosterism" of LNG and other fossil fuel? 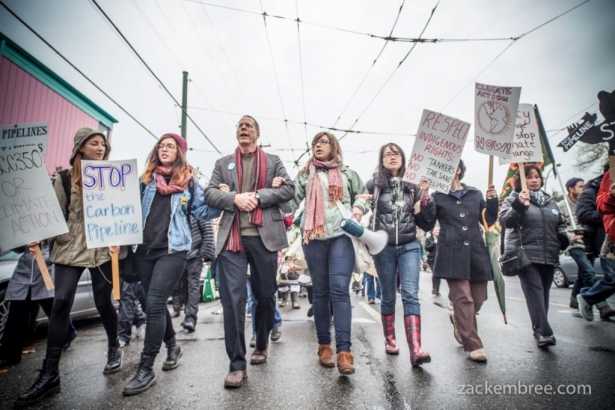 British Columbia is currently facing an unprecedented fossil fuel juggernaut. Tar sands pipelines, Liquified Natural Gas (LNG) and the expanded fracking that goes with it, ramped up coal exports — it’s all coming at us at breakneck speed. It’s going to take an enormous social movement to stop them.

This is the urgent political task of our generation. As I wrote over two years ago:

Once a certain tipping point is reached — and the science tells us this is likely somewhere in the neighbourhood of two degrees Celsius of warming — there will be no possibility of curtailing or reversing the climate change.

Catastrophic climate change will go from theory to reality … we are hurtling towards the cliff. If and when we go over, it won’t just result in massive loss of life and dislocation for us humans — we will also take millions of species over the cliff with us.

This is where the neo-liberal, capitalist joy ride has taken us. Heading over the edge. Only an unprecedented collective mobilization and effort can save us.

Broad public awareness of the threat posed by global climate change (hey, even the New York Times has ramped up the seriousness of their calls to action) is a big part of the reason there is already mass opposition to these fossil fuel mega-projects in this province. But much more is needed. Big Oil, Big Gas and Big Coal — and the governments, both provincial and federal, more or less beholden to them — are determined that the expansion of their industries will mark economic development in BC for decades to come.

While Enbridge’s pipeline and bitumen export plans face an enormous wall of opposition, other equally dangerous plans are flying under the radar or have managed to cobble together significant support. Of these, none is a bigger threat than the massive expansion of LNG and fracking projected for northern BC.

The Premier, BC Liberal Christy Clark, doubles as a world-traveling salesperson for the so-called “Trillion dollar” LNG boom she foresees as key to the province’s future. Her LNG dream is based on questionable economics. And, more importantly, it would lead to a nightmare scenario when it comes to staving off runaway climate change.

It turns out the government knows this, or at least has a better idea than they’ve let on. For months, they have refused to release their own scientific study of the greenhouse gas emissions of the LNG industry. The Environment Minister, Mary Polak, was briefed about the study last year, but the public has been kept in the dark.

Meanwhile, Christy Clark has been out selling LNG with her usual unbridled boosterism. In December she downplayed a major Harvard study pointing to alarming evidence of higher than thought methane emissions from fracking and LNG. When asked about LNG’s impact on climate change, she made this bizarre assertion: “We do see it as the biggest opportunity we have ever had as a province to reduce greenhouse-gas emissions around the globe … And we intend to take it.”

Earlier this week, that statement was exposed as utter nonsense, when the Canadian Press reported on warnings issued to the provincial government.

“Methane emissions are a particular concern since they have a global warming impact 21 times higher than carbon dioxide,” said one July briefing note.

“A small increase in the percentage of natural gas that escapes can have a significant impact on overall emissions.”

At a meeting last November, staff warned Ms. Polak that the federal government has updated its formula for calculating greenhouse gas emissions and that alone will increase methane values by 20 per cent. The province will need to follow suit, members of the Climate Action Secretariat told Ms. Polak.

Why are higher than admitted methane gas releases from fracking and LNG an especially big deal, and why would the BC government not want this to be public knowledge? Because BC has legally binding emissions reduction targets: the BC Liberals’ own legislation says they have to cut emissions by one third by 2020.

That’s simply not possible if the LNG boom goes ahead.

This Saturday’s Climate and Pipelines Assembly in Vancouver (April 26, 1pm-4pm at Harbour Centre, SFU campus, 515 W. Hastings) is an important chance to discuss this and other important issues, and to plan and debate how best to build the movement that can slow up and ultimately stop this fossil fuel juggernaut in its tracks.

This event is one of many taking place across the country in the lead up to this summer’s Peoples’ Social Forum.

The environmental movement in BC is in many ways very strong, particularly when it follows the leadership of First Nations defending their land, as is the case with the fierce opposition to the Enbridge pipeline. But for this movement to stop the juggernaut, it needs to be bigger, and more open, diverse and democratic.

I think the assemblies model promoted by the Social Forum could be helpful in getting us toward the kind of movement we need. Certainly this summer’s Peoples’ Social Forum will be an important chance for movements from across the land to cross-pollinate and discuss strategies and campaigns against our shared opponents.

Saturday’s Assembly will certainly have a diverse and committed group of people in the room to discuss these urgent matters.

Hope to see you there.