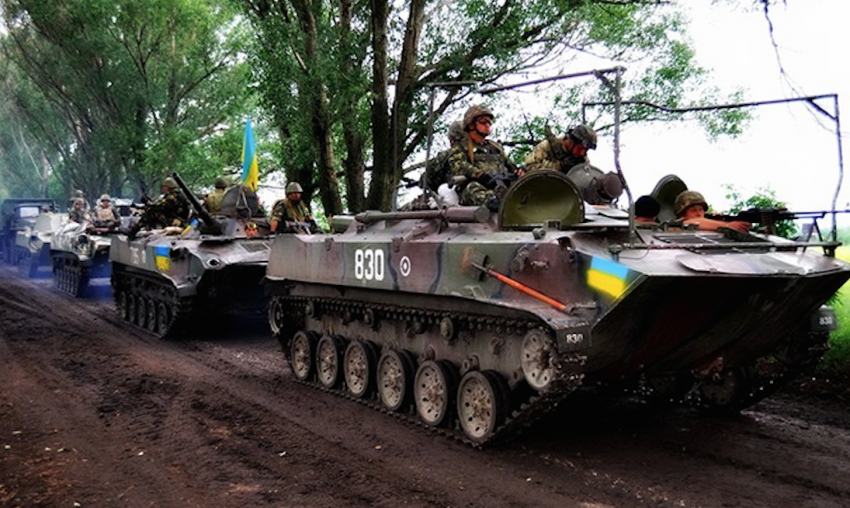 The catastrophic crash of Malaysia Airlines Flight MH17 over eastern Ukraine on July 17 is prompting a fury of speculative blame and intensification of shelling against cities and towns in eastern Ukraine by the government in Kyiv.

Taking the brunt of the speculation, and suffering the fury of the Kyiv government's grotesque, opportunistic reaction to events, are the beleaguered people of southeast Ukraine. Thousands of civilians and self-defense fighters have died in the conflict there in recent months. Tens of thousands have been driven into exile as refugees in Russia or in other regions of Ukraine.

The territory where Flight MH17 went down is controlled by self defense forces of the autonomous regions of southeast Ukraine, near the village of Grabovo (Hrabove), halfway between Donetsk and Luhansk cities, 50 km north and 100 km west of the Russian border. The region has been in open revolt against the Kyiv government since last March.

A typical western media headline graced the front page of the Vancouver Sun the day after the disaster. It read, 'Malaysian plane shot down by rebels'. Case closed. Guilty as charged.

Paul Koring of the Globe and Mail writes, "What brought down Malaysia Airlines Flight 17 is already known. A Soviet-era surface-to-air missile fired from separatist held territory in eastern Ukraine tore the Boeing 777 apart as it cruised more than 10 kilometers above the Donetsk region."

The Guardian headlines a July 19 story with, 'MH17: rebels block access to part of site of crash as evidence against them grows'. But the article doesn't contain a word of the claimed evidence.

Toronto Star columnist Mitch Potter blames what he calls "nihilistic rebels" and "Putin's monster" in eastern Ukraine, then proceeds to acknowledge that evidence they downed the aircraft is "circumstantial". He cites a Washington Post writer who says the disaster is all a result of "Putin's messy disaster he created in Ukraine".

In an editorial today, Toronto Star editors cite Stephen Harper in fixing blame: "Russia's military aggression and illegal occupation of Ukraine (sic) . . . is at the root of the ongoing conflict in the region." Russian President Vladimir Putin, say the editors, should "shackle his dogs of war".

CBC radio and television reporters have rushed to the scene for yet another stint of fly in, fly out disaster reporting à la the 2010 Haiti earthquake and the 2013 Typhoon Haiyan (Yolanda) that struck the Philippines. They already know the story. Their questions are not, 'Who shot down the plane and why?', but, "How did Russia provide the rebels in eastern Ukraine with the know-how to shoot down the plane, and why would it do that?"

British tabloids are universal is blaring on their front pages that 'Putin' or his hirelings in Ukraine are mass murderers.

Ukraine's president knows. Within hours of the disaster, he declared, "Today, terrorists killed three hundred people with one shot. Among them innocent children, people of many countries of the world." When the Kyiv regime speaks of eastern Ukraine, the term "terrorists" is synonymous with "the people who live there".

Airplane disaster as pretext for war

Never mind that assertions of what happened to Flight MH17 are speculative and an investigation has hardly begun. The post-crash political assessment is all about something entirely different than finding truth—it is being seized as an opening for a political witch-hunt and more violent war against the people of eastern Ukraine. For months, they have been refusing and resisting a brutal, economic austerity turn to Europe and accompanying military violence by the governing regime in Kyiv and its NATO backers. Kyiv's ground war against them has stalled because its foot soldiers are unconvinced of the cause or ill-prepared for what is required of them.

In the two days since the crash, the regime's violence has reached new heights of brutality. Artillery and mortars are raining death and destruction upon people and communities throughout the rebellious region. In Luhansk, a city of 425,000, at least 20 people died from shelling on the day of the crash. The shells have cut electricity and water supply. Much of communication is also cut.