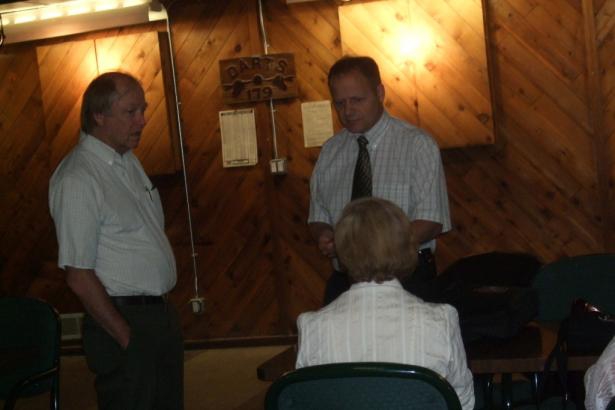 "The Liberal Party will change this -- I'll attempt to get Minister Jason Kenney to talk about the (Lost Canadians) problem," said Liberal MP Kevin Lamoureux, hearing about the struggle of the "Lost Canadians", people born to a Canadian parent who were stripped of citizenship due to archaic citizenship laws.

"If there's even one Lost Canadian, that's one person too many," he said.

The Deputy House Leader and Critic for Citizenship and Immigration was in Vancouver at the Canadian Legion on Commercial Drive to meet and greet constituents. He listened intently to the story of Jackie Scott, the daughter of a Canadian war veteran who grew up all her life in the country and learned that she had been excluded from citizenship because her parents were unmarried at the time of her birth.

Lamoureux has long championed important issues such as justice, immigration, labour, finance, education and housing since being elected to the Manitoba Legislative Assembly in 1988 and appointed Citizenship Critic last November. Yet the veteran politician and critic -- as well as other Liberal party candidates in the room -- initially drew a blank when Chapman asked them about the Lost Canadians issue.

Although prominent Liberal politicians such as Justin Trudeau and former Prime Minister candidate Michael Ignatieff have voiced support for the Lost Canadians, the issue remains largely unknown or untouched among Members of Parliament. In recent years, Chapman helped pass two new bills to grant citizenship for 95 per cent of "Lost Canadians", but continues to advocate for the 5 per cent of Lost Canadians whose status was left in limbo after a amendment to the Canadian Citizenship Act two years ago.

Lamoureux voiced his support for Chapman's cause, and expressed surprise that the problem wasn't more well-known to the public.

"CBC and CTV should be here right now," Lamoureux said.  "They should be asking, what's going to be done about this? The media should be addressing these questions and asking Minister Kenney what he's going to do about it."

Lamoureux said that he would bring the issue to the Citizenship committee's attention, and commented that he would like to see a change in the way that issues are debated.

"I'd like to change the committee structure," he said. "I should be able to ask the Minister endless questions, not just be given five minutes to ask about it."

"I know -- I tried to explain Jackie Scott's situation, but you can't do that in five minutes, you need an entire day," agreed Chapman.

"They cut me off," said Scott, remembering when she gave a testimony in Ottawa on June 11th, 2009 at the Standing Committee on Citizenship and Immigration in Ottawa. The date would have been her Canadian War Veteran father's 98th birthday. The topic of the day was to address the outstanding cases that have not been covered in the so-called Lost Canadian Bill -- Bill C-37. Scott, along with 5 per cent of the estimated 750,000 Lost Canadians in Canada, has continued to be denied citizenship, and has waited over a year for a reply on her third and fourth applications.

Lamoureux listened to Scott's story with interest, and said:

"You should be a Canadian citizen."

So you think you're Canadian, eh?