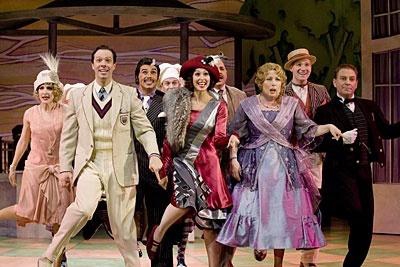 "It's like they're trying to elicit a Tea Party response,"  Vancouver Playhouse artistic managing director Max Reimer said. He was referring to reactions critical of public funding for one of the country's oldest theatre companies.

"It appeases the sort of mentality that thinks the government is in general wasteful. That faction doesn't see value in the arts, because they think the arts should not be funded in any way at all."

Vancouver Sun reporter Jeff Lee broke the story today about the City's $1 million bailout of the Vancouver Playhouse Theatre Company. He wrote that the theatre company was "in danger of going bankrupt with more than $826,000 in debt, half of which was owed to the city."

Reimer said the focus story was not so much about the Playhouse, but more about the political side funding for the arts with little public consultation.

"It's from an inside source. It has the feeling of an intrigue and I think the reporter's interest initially was playing out the political intrigue -- the idea of the article wasn't to help or hurt the Playhouse. It was to identify that the City is somehow doing something wrong. That's the political gain in the approach."

Suzanne Anton, mayoral candidate of the NPA, said she and others weren't happy about the way that the bailout was carried out.

"I got some pretty grumpy emails today from people who were unhappy about it," she said.  "And I share that. I'm very unhappy about it too, but the alternative seems to be worse."

Anton explained she voted for supporting Vancouver Playhouse, and that it was a unanimous decision by City Council.

"I did support it. Not that I'm disavowing what I did, but I'm not very happy that City was put in that position...there's really no reason why it should not work."

Reimer said it was no secret that the Playhouse was working with the City on helping to solve its financial problems.

"The arts community is acutely aware of both our situation and the solutions the City was working on," he said.  He said the issue was not widely discussed because of the complex setup of the Playhouse and the numerous arts organizations that would be affected.

"You have to be very careful because there are other groups involved," he said. "Chamber groups, for example, that work out of here. There's also a dance series that works out of here. We need to make sure the terms work for all of our organizations, not just the Playhouse."

The director argued that the $1 million is not exclusively for helping the Playhouse, but for "over 30 arts organizations" that work with the venue. He added that the $426,000 debt is accumulated, and not a significant figure in light of what other local arts organizations receive on a yearly basis.

According to a City of Vancouver committee agenda from March, many arts organizations received more than the Vancouver Playhouse over the course of a fiscal year.

Reimer said that the Playhouse "succeeds on the same terms as every other organization," but said that debts accumulated because it does not receive regular municipal funding, as is the case with some other large arts organization.

Anton talked about her mayoral campaign and what she would do to prevent such bailouts in the future.

"What I plan to do once I get elected is to put together a robust consultation including business arts organizations large and small, and figure out a way to finance the building that maximizes the opportunities. What it is right now is a cultural incubator, but it also has to be financially viable.  I want to see that building succeed; it's owned by the city."

Reimer said he was concerned that the news will affect private donations for the Playhouse. he remains hopeful, as that the theatre's shows have been receiving critical acclaim and picked up across the country.

He said that the loss of gaming funding from the province has caused arts organizations in general -- particularly the smaller ones -- to struggle financially over the past few years, and expressed regret that the Playhouse was being singled out.

"It's ironic that the Playhouse which is one of the least publicly supported, which receives more private funding than anyone else, is identified in the newspaper as an example of government waste," he said.