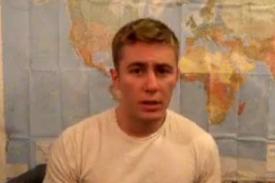 On Monday, just one day before the U.S. military formally ended its ” don’t ask, don’t tell” policy,  a 21-year-old soldier stationed in Germany confessed over the phone to the father in Alabama that he was gay. He broadcast his coming out phone call live on YouTube, causing a stir among viewers around the world.

He said that he has "known forever" about his sexual orientation, and asked his father if he still loved him as before.

“I still love you, son,” the father reaffirmed after a pause. "That doesn't change our relationship."

He went on to tell his son that he would "always be proud" of him and praised him for making the "brave" decision to come out.

The confession sparked a flurry of comments from YouTube viewers, ranging from encouragement to outrage.

See more on the conversation here: