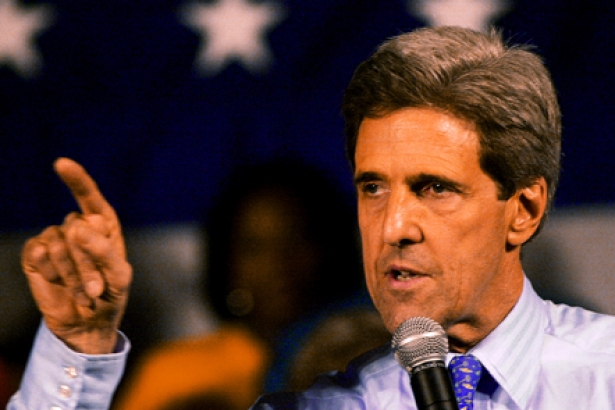 New U.S. Secretary of State John Kerry holds the power to decide if the controversial Keystone XL pipeline will go ahead or not. Given his track record, environmentalists have reason to hope that the project will be rejected.

In contrast to former Secretary of State favorite Susan Rice, who invested in the oil sands and thus had a financial conflict of interest in the Keystone XL decision, Kerry has spent the last 28 years on the hill as a climate hawk and does not have millions at stake in the project.

The former Massachusetts senator and 2004 Presidential candidate officially began his duties this week with a meeting with Canadian foreign minister John Baird in Washington, playing up the strong relations the two governments have as $1T trading partners. That relationship will be one for the news in 2013, as the decision to give the green light to the Keystone XL pipeline will be made this spring.

Kerry's appointment sends a message to Americans, just as the President's pivotal inaugural speech did, that his administration would "respond to the threat of climate change". His first major address in his post was filled with rhetoric that called for immediate action against climate change.

"We as a nation must have the foresight and courage to make the investments necessary to safeguard the most sacred trust we keep for our children and grandchildren: an environment not ravaged by rising seas, deadly superstorms, devastating droughts and the other hallmarks of a dramatically changing climate…", Kerry stated.

While all this is setting up for more and more likely of an outcome that spells trouble for Transcanada and Keystone's investors, Kerry's own financial ties to oil development have been in question.

The former senator invested $750,000 and $31,000 respectively in Suncor and Cenovus Energy, two Calgary-based oil development firms, but has since divested his holdings before accepting his cabinet role. Despite neither being a part of Keystone's development, their CEO's have been vocal supporters.

"I will not participate personally and substantially in any particular matter that has a direct and predictable effect on my financial interests or those of any person whose interests are imputed to me, unless I first obtain a written waiver," said Kerry.

With nearly $193 million to his name, Kerry stated that his investments were left to an independent trustee, leaving him allegedly unaware of its contents. Nevertheless, there is no further financial conflict of interest at play, but many environmentalists are on their feet, waiting to see if it makes a difference come April, when Kerry's State Department officially makes a decision on Keystone XL. Despite Kerry's heavy pro-environmental record, there has been no word from the State Department on where the decision may go.

As much as John Kerry deserves attention, the reality is that President Obama has the final say on this major project. Were he to green light the pipeline, all momentum Obama carries with the environmental movement would be crushed, and his inaugural rhetoric would be rendered worthless. Were he to reject pipeline, Republicans in Congress would have more reason to be uncooperative when he needs aid for further legislation.

Not only would relations in Washington become tense, but relations with Ottawa as well, and this week the Harper government made sure to quickly press on with lobbying the government to approve the $7 billion pipeline.

As any action that takes place in Washington, politics is in play and rumours have spread that Obama may use the opportunity of approving the pipeline in exchange for political capital to create climate-challenging policies. Some ideas that have been spread included a gas-emissions levy that would tax cross-border travellers.

Whatever the result of the decision this spring, it will define the administration and its true commitment to tackling climate change - something many Americans pine for, in the wake of a string of devastating climate-induced destruction in the Northeast.

- 91 per cent lifetime score by the League of Conservation voters

- Co-authored a book ('This Moment on Earth') on environmentalism with his wife, Teresa Heinz Kerry