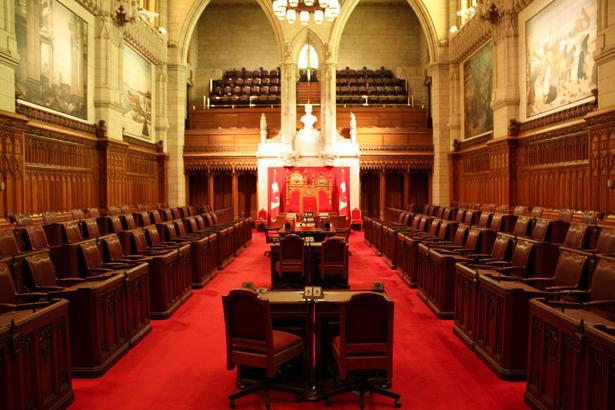 The controversial Bill C-38 is now in the hands of the Senate, which is scheduled for a third reading of the bill on Wednesday and a vote by the end of the week. Photo sourced from Wikimedia Commons.

Members of the Canadian federal government's opposition parties and environmental groups across Canada reacted with renewed vigor against the Harper government's proposed omnibus budget Bill C-38 on Tuesday, after it was passed in the House of Commons on Monday night in a vote of 157-135.

"Nurses are very concerned about the health of Canadians and the budget bill increases risk to Canadians of factors that contribute to ill health - poverty, environmental degradation and reduced access to services and social supports," said Linda Silas, President of the Canadian Federation of Nurses Unions as part of a press release from Ecojustice.

"We want stronger, not weaker environmental laws in Canada, and we want to see the changes to the federal environmental laws taken out of the omnibus budget bill and given proper debate and discussion in parliament," said Ed Whittingham from the Pembina Institute, a Canadian non-profit think tank on sustainability and environmental protection.

"The overhaul of the environmental assessment rules are a major concern. It means that big projects like new pipelines or mines will go through a sloppier assessment process, with more power to back room decision makers and less opportunities for the public to have a say,"  Gillian McEachern, Deputy Campaign Director of Environmental Defence told the Vancouver Observer.

Representatives from environmental groups and public service unions said their biggest concerns were the proposed changes to environmental protection and fisheries laws and fast-tracking the environmental assessment process for natural resource development projects such as oil pipelines and tar sands.

The bill was sent immediately after to the Senate for a first reading. A second reading of the bill is scheduled for Wednesday, and a vote is likely at the end of the week.

"I have been concerned through all phases of the debate on C-38 that so many members of Mr. Harper’s caucus, including Cabinet Ministers, seem so unfamiliar with the devastating nature of the legislation they are passing," May said in a press release.

The Green Party later confirmed that no Conservative MPs showed up to take the quiz. The quiz and answers were also posted online shortly after.

The bill is likely to pass by the end of the week through a majority Conservative Senate. A pre-study was reported to have raised little fiery debate and opposition, in a marked contrast to the House of Commons. There has been no reports of whether Senators plan to propose amendments to the bill.