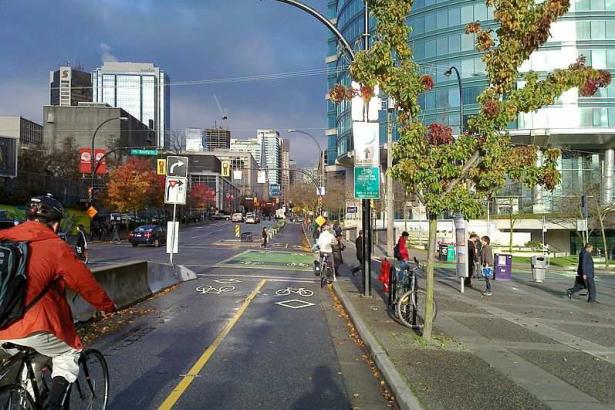 It may not be ranked the most livable city in the world any more, but it's now the greenest.

The Canadian Press has the latest on Vancouver:

TORONTO -- Vancouver ranks among the greenest of them all when it comes to environmental performance, placing first in Canada and second overall in an assessment of North American cities.

The coastal city placed behind San Francisco and ahead of New York City in the U.S. and Canada Green City Index released Thursday.

The index measures and rates the environmental performance of 27 cities on both sides of the border in nine categories: CO2, energy, land use, buildings, transport, water, waste, air and environmental governance.

Sponsored by Siemens, the index is a project run by the Economist Intelligence Unit, an in-house research unit of the British magazine The Economist. Cities were selected independently rather than through requests from city governments to be included.

A panel of global experts in urban environmental sustainability advised the unit in developing methodology for the index.

The EIU was also behind a survey released last month which saw Vancouver knocked off its perch as the world's most livable city, falling to third place behind Melbourne and Vienna.

Vancouver landed in the top 10 in each of the nine individual categories, ranking first among all cities with the lowest carbon dioxide emissions and best air quality.

According to the report, Vancouver emits 4.2 metric tons of CO2 per person, far below the index average of 14.5 metric tons. The report said the city's low emissions were a result of policies aimed at green energy promotion and the dominance of hydropower in Vancouver's energy grid.

The city's "impressive'' performance in the air category was the result of low emission levels of all pollutants that were measured, including sulphur dioxide and nitrogen oxides, the report said.

Calgary topped the list in the water category. According to the index, the city consumes 428 litres of water per person per day compared to the index average of 587.

The city was also cited for its low water distribution leakage rate, which the report said "reflects the city's vigilance in continually monitoring the system.'' Calgary was also noted for its high percentage of metered customers and strong wastewater management.

Here are some of the top performances among other Canadian cities in other categories:

Montreal: The city took the fourth overall spot in the transport category with its public transit system deemed one of the best in the index, and the sixth longest. The report notes that while the city's average commute time is "longer than normal'' due to travel times from elsewhere in the metro area onto the island, "the city's high population density ensures efficient transport once in the city of Montreal.'' Montreal's high score was also driven by having the second highest share of non-automobile commuters. Some 29 per cent of workers commute by public transit, bicycle, or on foot -- more than double the index average.

Ottawa: Canada's capital ranked third in land use. Ottawa's city limits encompass an area five times larger than the average city in the index "creating both opportunities and challenges for land use policies.'' The report said that while the city's low population density (300 people per square kilometre) leads to some urban sprawl, the city limits also encompass "vast amounts of green space'' -- the highest percentage in the index.

Toronto: The city earned a fourth-place ranking overall in the waste category, which the report said was driven by its 44 per cent recycling rate-- "solidly above'' the 26 per cent average. The report said the effort was supported by "well-regarded waste-reduction policies'' such as composting, waste separation and volume-based trash payment, and a public awareness campaign.