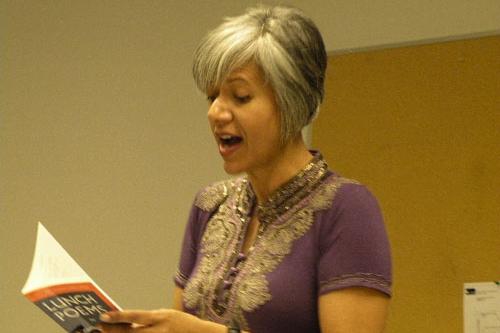 Shauna Sylvester of Carbon Talks, poet Renee Saklikar and Betsy Warland of The Writers Studio (above). Saklikar's warm, deferential manner makes giving a poem body through breath and cadence seem so simple .... until you try it at home. Which you should.

Carbon Talks stepped sideways from policy into poetry with its brown bag lunch this week.

Vancouver poet Renee Sarojini Saklikar read to an audience of writers and social entrepreneurs. Her poetry portrayed Vancouver and its residents from street level: SkyTrain stations, bus stops, a garden on a busy street. “I don’t drive and I don’t own a cellphone,” Saklikar said, “so you get the idea.” Her subjects include bus mates, young men hanging around the neighbourhood, political heroes and the moon. (“Every poet has to take on the moon, to show their chops.”)

Her poems direct the listeners’ attention to issues of social justice and to a different relationship with traditional forms of poetry.

“I’m a Canadian citizen, born in India, making poems in my mother tongue, which is English,” Saklikar said. “These conditions can lead me into language transgressions. In addition, I use traditional poetry forms to mess with them. And I redeem transgressive words.”

For example, Saklikar’s “stuttering sestina” entitled “Spring Comes to My Garden in East Vancouver (Poetry is Dead magazine) springboards from the rigid repetition of a sestina to give the poem a jammed up feeling. It further transgresses by using the word “motherfucker” as one of the repetitive line endings. “We live in a place where a lot doesn’t get spoken,” Saklikar said. “I try to not look away. Transgression can help find beauty and vulnerability even in suffering.”

One listener asked Saklikar about her objectives when she writes a poem: is it simply for people to listen to, or is it to change the world? “Once a poem is done, it is no longer mine,” Saklikar answered. “If the reader or the gods can make it into something, I would hope for an impact on how we see race and class, romanticism and liberalism, how we romanticize race and identity.”

Saklikar invited the audience to experience poetry as a body with breath and cadence, something that the reader and listener create together. To her, bringing a poem to life with an audience is becoming more important than publication. But she agreed that publication is wonderful, and her poems have appeared in many journals, including the Leaf Press, Sub Terrain and PRISM, among others.

Another point of inquiry for Saklikar is what constitutes a poem. “Some may argue that rhyme and meter met their demise after World War Two,” she said, adding: “Although both currently enjoy much popularity, poets still need to ask what makes a poem a poem?” As an example of freedom in form, she read from Frank O’Hara’s Lunch Poems, Poem (Lana Turner has Collapsed), a jaunty rush down a street in a storm. In response, Saklikar offered up a poem composed on public transit:

Do Not Sit too close

Do Not Wait too long

At that bus stop

Do Not Look into the eyes of that man, nor that one, no, not that one, either,

Down to your boots, your wedge heels, stilettoes, mary janes, runners,

Who is it, who always walks behind you,

Walks rides parks, rides, who is it in December?

Where are the people? They are safe in the mall.

The train rattles on. The houses glitter.

Saklikar credits The Writers Studio at Simon Fraser University with “outing” her as a poet. “I found permission to not always worry about perfection so I was able to risk trying things. The program taught me how to identify myself as a writer.”

Saklikar’s largest work, thecanadaproject, is a life-long poem chronicle. It includes poems about Air India Flight 182, the terrorist bombing of an aircraft that killed a beloved aunt and uncle on their way home from their first trip to Canada. “I’m fascinated with long forms,” she said. “People say my husband gives long speeches. For me, it’s the long poem.”

The performance ended with a sense of buoyancy, as if Saklikar’s layers of meaning and discussions of form provided nutrition as surely as the brown bags that held the lunches. Nor did it feel far from Carbon Talks core mission: writing poems on public transit gives the low-impact travel choice further meaning by adding to the city’s cultural wealth.