Ontario campaigners add their voices to pipeline opposition, as B.C. Northern Gateway critics make their case in the nation’s capital this week. 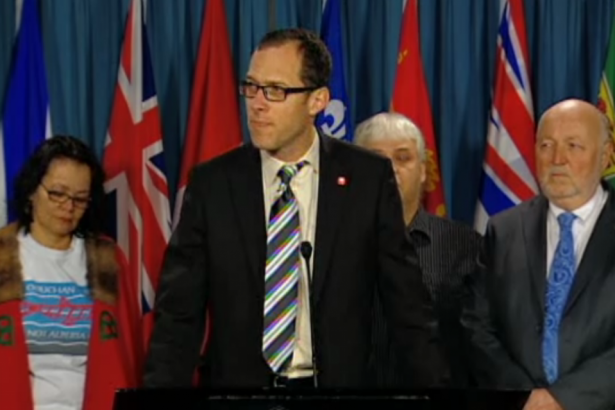 A delegation of B.C. First Nations, business and union leaders traveled to Ottawa this week to meet with opposition MPs and raise concerns about the proposed Enbridge Northern Gateway pipeline. But anti-oilsands advocates from the West Coast aren’t the only ones making the case against the pipeline—organizations and campaigners in Ontario are ramping up eastern opposition as well.

Leading the delegation to Ottawa is Saik’uz First Nation Chief Jackie Thomas, an outspoken member of B.C.’s Yinka Dene Alliance. Accompanied by union leaders and environmentalists, Thomas spoke at a press conference Tuesday to outline some of the major threats associated with the Enbridge proposal.

Also in attendance was Rick Smith, executive director of the Ontario-based group Environmental Defence, who made reference to the remarkable level of public opposition the project is facing across Canada.

“Even in the face of an unprecedented bullying and intimidation campaign by the oil industry and by its friends in government,” said Smith, “that campaign of intimidation has only strengthened and broadened the alliance of people who are determined to oppose the Northern Gateway pipeline and tanker project, because of its threats to the environment, to First Nations and to communities in British Columbia.”

Smith noted that since January, over 45,000 Canadians have signed a petition opposing the pipeline and tanker route, in addition to more than 4,000 individuals and groups signed up to speak at ongoing regulatory hearings. Northern B.C. municipalities like Prince Rupert have passed resolutions to oppose the project, and so has the union representing B.C. fisheries workers.

Pipeline opposition has been strengthened even further with the support of the Canada-wide Communications, Energy and Paperworks (CEP) Union—which represents over 15,000 Canadians including many workers employed in the oil sands.

“Our membership are diametrically opposed to the building of the Enbridge pipeline,” said CEP union president David Coles.

“Pumping raw bitumen out of Alberta and Saskatchewan is nonsensical. It’s a job destroyer. We support a four-pillar or a ‘four-legged stool’ approach—you must be able to resolve the issues of the economy, of First Nations rights, of employment, and of the environment.”

Coles’ “four-legged stool” approach captures many of the arguments being repeated by pipeline opponents across B.C., emphasizing the great risk to both ecosystems and the economy. Of course, he also acknowledged the importance of First Nations rights—an element many see as the major roadblock standing in the way of the project.

Because no treaties were signed in B.C., Aboriginal title still applies in traditional territories that would be crossed by the pipeline. As a result, these groups must be consulted about any project that could undermine or affect the value of their claims.

Given the number of Aboriginal groups that have come out against Northern Gateway, Chief Thomas is confident that declarations involving First Nations Rights and Title will put an end to the pipeline.

“We will defend our Rights, no matter what bully tactics the federal government throws at us,” she said in a release. “Our decision has been made: Enbridge will never be allowed in our lands.”

Thomas said the Yinka Dene Alliance plans to pursue a legal challenge if authorities approve the pipeline. Natural Resources Minister Joe Oliver has said that the government will honour its “moral and constitutional obligation” to consult with First Nations on this issue, but maintained that since Aboriginals don’t have “veto power”, the final decision will be made in the national interest.

In Ottawa this week, Thomas and the delegation briefed NDP and Liberal MPs, met with Green Party Leader Elizabeth May, and requested meetings with Minister Oliver and Environment Minister Peter Kent (both declined). The Ottawa visit was just one stop on the group’s tour, as they bring their message to other cities across the country.

In addition to national organizations and unions like CEP, there are a growing number of environmentalists trying to spread the word about the hazards of Northern Gateway in Ontario. It may not be as pervasive an issue out east as it is here in B.C., but citizens and green groups in different provinces are increasingly getting involved in the pipeline debate.

The Ottawa-based nonprofit Nature Canada is one of the organizations advocating against the Enbridge project. The group’s expertise in conservation and wild bird habitats has led to an extensive letter-writing campaign, along with written submissions to the Northern Gateway Joint Review Panel (in collaboration with BC Nature).

According to Nature Canada spokesperson Chris Sutton, tanker traffic associated with the proposed Enbridge route would displace up to 30 different species of marine birds that rely on the coastal ecosystem, not to mention the devastating effects that would be felt if there were a spill.

“There are 28 important bird areas in the northern B.C. coast, and the whole Queen Charlotte Straight is an extremely globally important area for marine birds, other marine animals and fish,” Sutton wrote in a recent blog post.

“This rich ecosystem would be exposed to oil pollution from increased tanker traffic and an impossible-to-rule-out oil spill. The pipeline will also fragment the pristine habitat of boreal birds and other wildlife, including caribou and grizzly bears.”