Coast Guard staff sent to assess a Northern BC oil spill were caught on video fishing from their boat—a response the Gitga'at Nation says is "disgraceful".

An oil spill reported in the Grenville Channel near Hartley Bay, BC this week has the local Gitga’at Nation worried about the health of their fish. But apparently those concerns weren’t shared by Coast Guard staff sent to respond to the spill, who residents caught on video fishing from their boat instead of assisting with cleanup efforts.

The spill—reportedly stretching up to five miles across the water—is presumed to have come from the sunken U.S. army transport ship Brigadier General M.G. Zalinski, which sank in 1946. A commercial pilot flying over the area reported the oil to the Coast Guard on Tuesday evening. But Gitga’at Chief Councillor Arnold Clifton says he’d been noticing the slick for weeks and had reported it earlier.

On Wednesday, the community demanded an immediate cleanup response from federal agencies, and sent out a number of Gitga’at Guardians to assess the situation and take samples of their own.

"When they got there, they found the Coast Guard fishing," said Clifton, describing the government’s oil spill response as “disgraceful”.

“[The wreck] is still leaking. Every day she’s burping up fuel, and the Coast Guard is aware of all this…It seems like they don’t care,” he told the Observer.

Despite complaints about the agency’s slow response, Coast Guard spokesperson Dan Bate confirmed that multiple actions had been taken since the spill was reported.

According to their aerial assessment, Transport Canada estimated that the oil released in the water amounted to less than one litre. But Clifton, who saw the spill from the air on Tuesday, said that estimate is “a joke”.

Bate said that although the oil is visible for a long distance, it is likely only a small amount spread out in a very thin layer on the surface.

“Based on that, it is obviously very minimal and unfortunately, it’s also non-recoverable. You cannot clean up that kind of sheen,” he said.

Regarding the Coast Guard’s fishing activities, Bate said he could not comment on actions taken by local response teams in their daily business, but said such recreational activities were “unlikely and unusual”.

Historical wreckages continue to cause problems

The Zalinski is said to have been carrying approximately 700 tonnes of heavy oil (or “bunker fuel”) when it sank 66 years ago. According to the Gitga’at, there have been a number of other leakages in the past, but they say that many appeals to the Coast Guard and other federal agencies for cleanup assistance have gone unanswered.

“This wreck happened during the war…but no one was accountable for it,” Clifton said.

To help prevent more of these small, unrecoverable spills, Bate said the Coast Guard and related federal agencies have responded by sending divers out to make assessments and patch holes.

“They basically apply patches to mitigate any release of oil. But of course, as time goes on there can be other weaknesses in the steel and it can release more fuel. So as early as potentially tomorrow, we’re looking at having divers on site to go down and make a further assessment on the vessel." 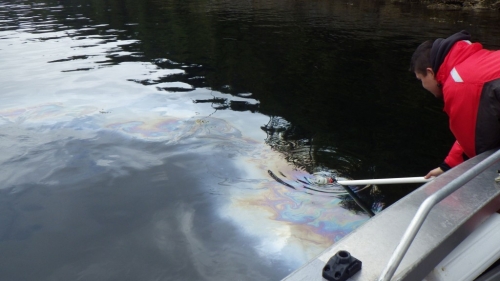 A Gitga'at Guardian takes oil samples from the water

Also of concern to local residents is the wreckage of the BC Ferries vessel, the Queen of the North, which sank in 2006 and has also been reportedly leaking fuel. As the Gitga’at depend on the ocean for up to 40 per cent of their traditional diet, such continuous spills and marine hazards can have a direct impact on key food sources.

“One of the big concerns I have is that we have three major cockle beds, and two of them are in Douglas Channel. One of them is just over a mile from where the ship is sitting there,” he explained.

Local leaders like Clifton say ongoing problems from wreckages like the Zalinski indicates the government’s lack of commitment to marine and environmental safety. It’s a particularly sensitive issue for the community right now, given current debates over the controversial Enbridge Northern Gateway pipeline—which would bring hundreds of oil tankers through the same channels each year.

“This incident definitely raises questions about the federal government’s ability to guard against oil spills and to honour its clean-up obligations,” Clifton said on Wednesday.

“As a result, our nation has serious concerns about any proposal to have tankers travel through our coastal waters, including the Enbridge proposal.”