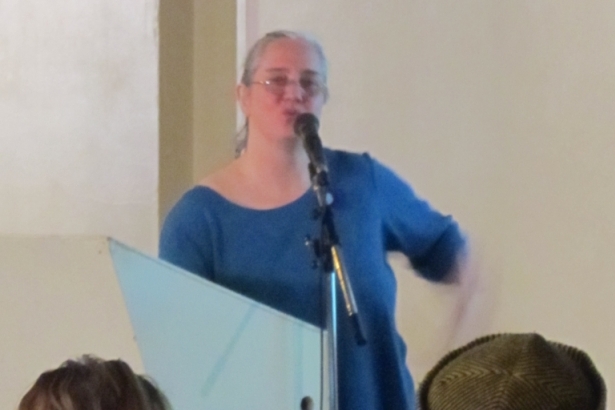 Michelle BarlondSmith in a photo by Mike Chisholm

Michelle BarlondSmith had a blunt assessment of her experience with the 2010 Enbridge oil spill on the Kalamazoo River.  “You get to say goodbye to a lot of friends.”

Speaking to a standing room crowd at Vancouver’s Mt. Pleasant’s Heritage Hall Thursday night, the photographer and former airline worker from Kalamazoo, Michigan recounted the hours and days living along the Kalamazoo River after an Enbridge pipeline spilled almost one million gallons of diluted Alberta oil into the river and along the riverbank.

BarlondSmith used her own photographs of the devastation to the river and wildlife along the river, the subsequent clean-up efforts and the health impacts to provide a first-hand impression of what an oil spill of diluted bitumen can do to a community.

“We had four deaths in first year –two died within two months. I now have said goodbye to 17 people who I met since the oil spill,” said BarlondSmith.  “When these spills happen, there are going to be consequences.”  The Vancouver Observer has not been able to confirm the validity of BarlondSmith's statement that people died as a result of the spill, despite inquiries in Kalamazoo.  There are no other reports of such deaths.

BalondSmith said many of the small communities along the river have been closed down and families have moved away. The trailer park where she lived with 81 families is now a community of 20. Businesses have closed or relocated, tourists stay away and companies considering a move to the area have changed plans. Then there’s the daily impact of a massive clean-up in a normally quiet, tranquil rural community.

“You get used to air boats a lot. They (Enbridge) brought in a lot of people from Louisiana. If you’ve ever been near an air boat, you know it is loud and sends a plume of water up in the air as it races up and down the river,” said BarlondSmith. “You have to deal with helicopters every single day of your life, going over your property five times a day.”

“You get used to speaking to government officials,” said BalondSmith. “They keep asking you if you are feeling well, do you have a headache.”

She also related stories of neighbours being threatened with arrest if they continued to rescue oiled wildlife. BalondSmith says Enbridge was the only organization allowed to deal with stricken animals.

BalondSmith also commented on the slogan “No pipeline, No tankers, No problem”, which has become a slogan of the anti-Enbridge pipeline caucus. However, she says British Columbians can add another slogan, ‘Remember the Kalamazoo’.

The Thursday evening assembly was one of the first community-wide meetings held in Vancouver to discuss the proposed Enbridge Northern Gateway Pipeline from Alberta to the BC coast.

The National Energy Board is holding Joint Review Panel meetings around BC and Alberta to discuss the project.

However, the public was excluded from sitting in on oral statements during the panel hearings in Vancouver this month. ForestEthics advocacy group organized the meeting which drew a cross-section of Vancouverites. The meeting provided a venue for the varied factions opposed to the Northern Gateway Project to meet and discuss the project and provide “an evening of powerful stories that highlight the need for all of us to take a stand to protect our water from oil spills.”

Other speakers at the meeting included 12-year old Ta’kaiya Blaney of the Sliammon Nation just North of Powell River spoke about the significance of the land and environment and the impact an oil spill would have on the region and future generations.

“I want to go back some day to see the spirit and black bears hunting for fish, and I want my great, great grandchildren to be able to practice their culture in this environment.”