With the Enbridge Northern Gateway Joint Review Panel (JRP) hearings underway, one man battles the multi-billion dollar oil and gas industry to save his people's land and culture before they are nothing more but an ancestral tale.

On the outside, northern British Columbia is a beautiful place. Look closer, though, and a different world appears. A much darker world. One of drilling, mercury-infested water and cancer. A place where people and land suffer the same. A place that disintegrates with each fire explosion in the starless night sky. A place they call Fractured Land.

It's a place of expanding industrial development that threatens to destroy the Dene people, land and culture. A land poisoned by unconventional gas. Where oil spills go undocumented, forgotten.

At the centre of this documentary is one young man who is trying to save this land and heal the wounds that reckless development has caused to both the ecosystem and its people. 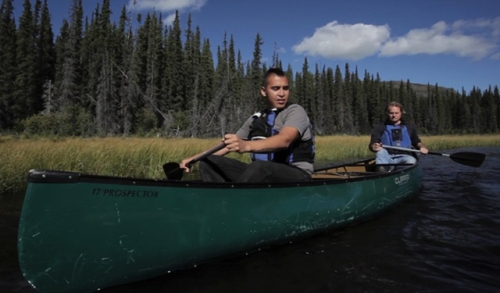 Caleb Behn, an a young, emerging indigenous leader and law student at the University of Victoria, recalled the flare stacks that he saw in his home territory.

"We would look out over the land from the high country, where the medicines grow, late in the evening, and see these lights, all over. You can see them from 10 to 15 kilometres away because they are giant flames," he said. In his view, there is a clear connection between the gas development poisoning his land and children born with birth defects in the community.

Behn is an experienced hunter (he killed a moose on Sunday) who can handle himself in the wild, but he's taking on Big Oil and Gas where it hurts -- in corporate boardrooms and in the courts. 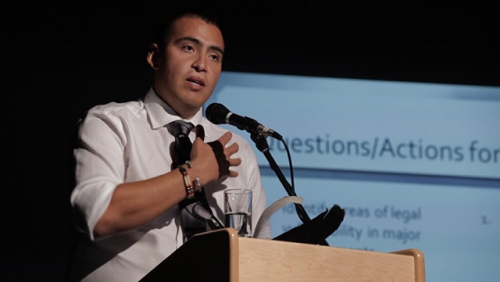 "It's really heartening. I feel amazingly-blessed to have the support," he said. "It's the testament of a lot of work, a lot of people put themselves, their reputations, on the line for what they believe in." .

Behn comes from a politically-active family of chiefs who instilled him with a strong sense of responsibility to look out for his people.

When unconventional gas came to his people's territory, which soon became plagued by drugs, sexual abuse, alcohol and poor health care, Behn said that he felt it "inappropriate that the government would sell off all that land and take all that money not considering the impacts on the indigenous people or the local communities."

"They don't see what's happening here. The heavy development. The natural gas. The expansion industry. This gas has been going to tar sands for years, this gas has been the most energy-intensive, dirty gas ever produced in history," he continued, acknowledging that the gas is more expensive there than in Vancouver.

It doesn't help that some of the major environmental problems caused by fracking are invisible. Unlike an oil spill, the impact on the environment is not evident upon a first glance.

"To really understand the consequences of what's happening up here you have to look deeper. It's not as simple as people make it out to be.  It's underground, literally two-to-three thousand metres under the earth where there are no cameras, where there are no people to see what they are doing," he said. "It's way more complicated right here because it's a fractured environment."

Fracking (hydraulic fracturing) involves deep drilling for "natural" gas, sending high-volumes of water, sand and chemicals into the earth. The practice is widespread throughout the region, with wells numbering in the tens of thousands, according to the film's official site.

Behn and his people have been living off the land for hundreds of years, and many feel that the development is destroying their environment.

"They (the workers) come in big trucks, big rough men, trucks everywhere, and people just coming and going, going out to the oil and gas patch," he continued, noting that unlike in Fort McMurray, Alberta, where it's situated all  in one place, it's spread out over a thousand square kilometres in Northern BC.

"What you see is a rally Friday night on pay-days. The guys come out of the bush with $30,000 in their pockets."

And what does it mean to Behn and his community to see the land being ravaged by industry?