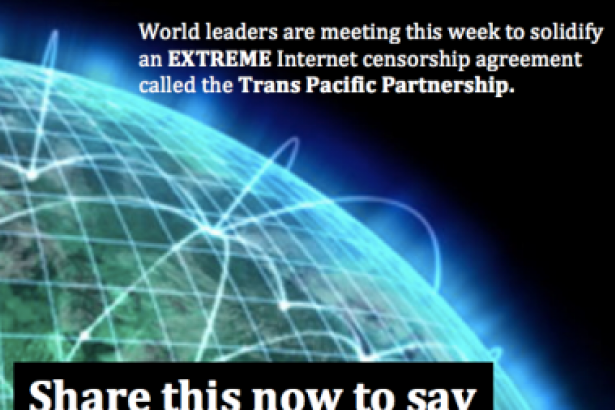 Speak out now against Internet Censorship at https://OpenMedia.org/censorship

What an incredible response! It's been just a few days since we launched our 'No to Internet Censorship' letter calling on world leaders not to sign away our fundamental digital rights in secretive Trans-Pacific Partnership (TPP) talks at the upcoming APEC summit in Indonesia.

When we launched this letter and encouraged the Internet to sign on all of us here at OpenMedia were amazed by how fast it took off. Within just the first hour, thousands had added their voice. In just the first few days, over 93,000 of you spoke out to send a powerful message to TPP leaders - and that number just keeps on climbing, with more signing up every single hour. And momentum continues to grow as hundreds share on social media - this campaign is really going viral. We even hit the front of Reddit, which nearly crashed our server. At OpenMedia, we've never seen anything quite like it.

This massive response points to a rapidly growing groundswell of concern about the TPP - a highly secretive and extreme international agreement that's been cooked up behind closed doors by unelected industry lobbyists and government bureaucrats. Citizens, public interest groups, and even elected representatives have been completely shut out from the TPP process.

Why all the secrecy? Well, when you see what’s contained in leaked drafts of the TPP, you can see why TPP lobbyists are so desperate to keep their plan under wraps. We know from these leaked drafts that the TPP contains dangerous and extreme new internet censorship rules - rules that could criminalize your online activity, cost you money, and even see whole families kicked off the Internet for alleged copyright infringement.

In short, the TPP amounts to an Internet censorship plan that will make the Internet more expensive, censored, and policed. That’s why so many people are speaking up right now to tell leaders of TPP nations to listen to their citizens, not just to old industry lobbyists desperately trying to protect their failing, outdated business models.

Now we've got to keep up the pressure - especially as leaders are planning to wrap up their TPP talks during this week's APEC summit.

We need all hands on deck - and here’s how you can help:

Our small, dedicated team here at OpenMedia really appreciate your support - the more people who join our campaign, the greater the pressure we can bring to bear. We win by growing our numbers!;

Join in this powerful call for an open, censorship-free Internet and a connected future!