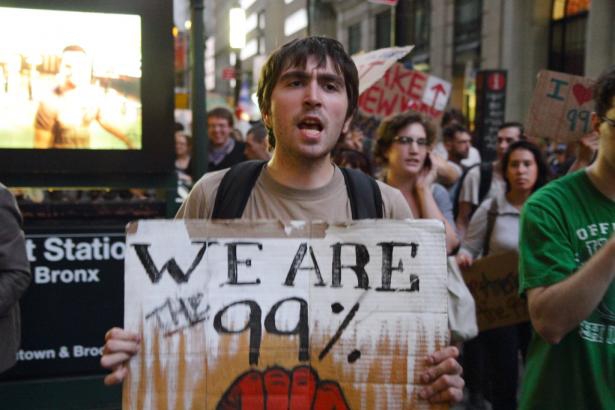 A man joins Occupy Wall Street protesters in a march through the financial district on Sept. 26, 2011. Photo by Paul S.

Occupy Wall Street is a rapidly growing global movement described by organizers as an attempt “to end the monied corruption of our democracy”.  It officially began on September 17, 2011, when a group of dedicated activists started camping out in the financial district of New York City.

The core of the movement is located at Manhattan’s Zuccotti Park, where nightly meetings – General Assemblies – are held at 7 p.m. to reinforce group ideologies and decide on practical matters. Labour unions, politicians and celebrities are continuously joining in support, with no planned end to the occupation.

Satellite occupations have now popped up in hundreds of cities worldwide, with new protests set to begin in up to 15 Canadian cities including Vancouver, Toronto, Calgary and Montreal. Supporters of #OccupyVancouver plan to set up camp at the Vancouver Art Gallery, with a General Assembly to begin at 10 a.m. on Saturday October 15.

How did it start?

It’s difficult to pinpoint one specific catalyst that brought the Occupy Wall Street movement to where it is today. In essence, the current protests are the culmination of months – or even years – of work done by a number of dedicated activists and organizations.

Many have traced the movement’s roots to a message put out by the Vancouver-based magazine, Adbusters, which stated simply "Occupy Wall Street. Sept 17. Bring tent." Adbusters founder and editor-in-chief, Kalle Lasn, has voiced his excitement about the overwhelming response, but he also gives credit to others who helped get it off the ground.

In an interview with The Tyee, Lasn explains, "We always thought of ourselves as the catalyzers, the people who set that meme, as we like to call it, in motion. And right from the start we decided that we're not going to play a part on the street...”

So if Adbusters initiated the protest in words and via social media, who were the initiators on the ground? The answer is not as simple as a single group or individual.

Most descriptions of Occupy Wall Street – published by organizers, supporters and by media – characterize it as a largely decentralized and leaderless movement. However, there are a few key players that helped to publicize and essentially define the Occupy protests.

First, there were the online “hacktivist” groups like Anonymous and AmpedStatus.com, who were organizing themselves against corruption and corporate America long before the “official” occupation began. There’s also the NYC General Assembly, an ad-hoc group that holds meetings (without leaders) and comes to decisions based on a purely democratic process.

When Adbusters put out the call to converge on Wall Street, it struck a chord with these groups and many more. Websites, Facebook groups and blogs such as We Are The 99% jumped on board and soon enough, the online community had organized enough to ensure the real event had a powerful turnout.

Depending on who you ask, the movement can encompass a relatively wide range of causes including demands to end income disparity, government corruption and even global warming. It all comes down to the 99% - the masses who feel they have suffered in the poor economy, who resent the wealthiest 1% for their gains and their increasing political power.