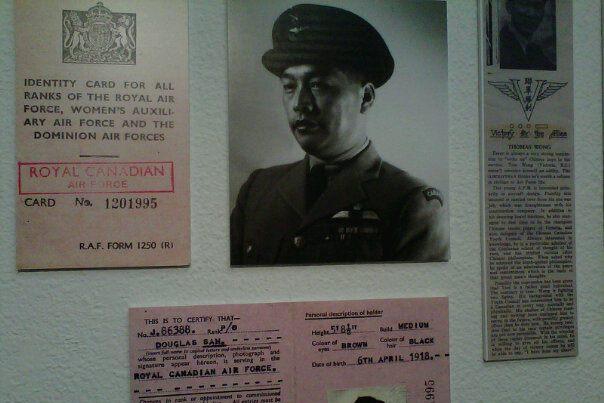 Looking at the bright expressions on their faces in the photographs, few people would imagine that none of them were citizens of the very country they were fighting for at time.

Chinese Canadians who survived the war were eventually granted full rights, but for those who died in battle, the dream of being recognized as a Canadian citizen remained one that would elude them forever. Chapman and others are currently working to convince the federal government to recognize the fallen soldiers as Canadian citizens.

“It wasn't until 1947 that Canadian legislation changed. Only then, Chinese were all recognized as Canadians, and were granted their citizenship,” Army, Navy and Airfoce Veterans representative Paul Lee lee. Lee is President of Pacific Unit 280, a Chinese Canadian unit.

“So after the war, for two years, they were still not recognized.”

Lee said one of the most famous examples was Quan Louie, a flying officer with the Royal Canadian Air Force who died during active duty.

“There were bomber crews shot down over Berlin, including Quan Louie, a famous son of the owner of London Drugs (Tong Louie, founder of the HY Louie Group). Quan was shot down over the bombing over Berlin during the war. He was actually never recognized as a Canadian when he was alive,” he said, adding that a lake in Burnaby has since been renamed in his honour.

While the Chinese Canadians' contributions have since been celebrated, the question of citizenship remains a difficult issue: in 2009, Bill C-37 granted citizenship to thousands of individuals, but people born before 1947 – including World War II veterans who served the country – remain excluded to this day.

Judy Lam Maxwell, the chief researcher for the exhibit, said that since Chapman began advocating for posthumous recognition of the deceased Chinese Canadian soldiers last year, many from the Chinese Canadian Military Museum Society have strongly supported the call.

"No one thought twice about it because people wouldn't think of giving status to someone who was deceased," she said. But, she added, the issue wasn't a wide concern among many Chinese Canadians because it was so long ago, and most people today have acquired citizenship.

Chapman, however, continues to push for recognition of fallen Chinese Canadian soldiers as a matter of principle. Looking at a black-and-white photograph of a Chinese Canadian man in a crisp uniform, he asked:

“Are you telling me that this person wasn't a Canadian?”